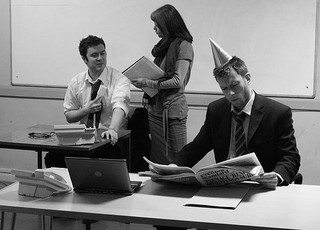 Research from www.VoucherCodesPro.co.uk highlights what not to do around your colleagues over the festive period. Some 1,621 people aged 18 and over from around the UK were quizzed about their most embarrassing and regrettable faux pas at office parties. All those taking part were in full-time employment, in an office environment and had attended a Christmas party in 2012.

Here are the ten experiences deemed to be the most regrettable office Christmas party faux pas. 1. An office manager in Cardiff claimed to have had “a few too many” and thought it was a good idea to hit on his boss’ wife, telling her that she would be better off with him than her husband. Unfortunately, his boss overheard the whole slurred conversation. 2. A man in his early 40s from an IT company in Birmingham claimed that, after a couple of drinks, all he wanted to do was play strip-poker and he tried his hardest to convince his female boss to get everyone involved – she didn’t. He even went to the trouble of stripping down to his underwear to try and encourage everyone to ‘release their inhibitions’. He received a verbal warning the next week.  3. A marketing assistant in her 30s went to hug her colleague goodnight, only to throw up all over her dress, shoes and handbag after having done shots at the bar. 4. A woman in her early 20s, who was interning in an accountancy firm in Doncaster, claimed that after a couple of drinks her colleagues convinced her to show off her belly dancing skills, to which she stripped down to her see-through tights and bra for. 5. A 40 year old receptionist told her colleagues that she preferred the company of her cats at home to those she worked with, as her cats were much more “interesting and intelligent”. The relationships with her colleagues suffered as a result and she later handed in her notice. 6. A man in his 30s from a call centre in Newcastle decided that the office Christmas party would be the best place to tell his boss that he was worth at least 5 times the salary he’d been put on and that his boss had until the end of the month to give him a rise. Instead of a rise, he was later demoted. 7. One man, a 50 year old from a law firm in Cambridge, got a little too drunk at his office party and thought it would be a good idea to urinate in front of the bar, for all to see. He was kicked out of the venue and mocked by colleagues the following week. 8. An HR assistant from Abergavenny attempted to do ‘the worm’ whilst surrounded by his colleagues on the dance floor at their Christmas party. He got a little too excited and, when doing the move, accidentally kicked a female colleague in the face, breaking her nose. Luckily, she forgave him. 9. A buyer in her 20s from Liverpool lectured a colleague from another department about the effects of drinking whilst pregnant and scorned her for doing so, only to be informed the lady in question wasn’t actually pregnant; just slightly overweight. 10. New to the company, one man (an insurance assistant in his 30s) accidentally exposed an affair within the office, mistaking the two for husband and wife after having seen them kiss outside of work. If that wasn’t bad enough, partners were invited to the office party. Image Source By Shané Schutte