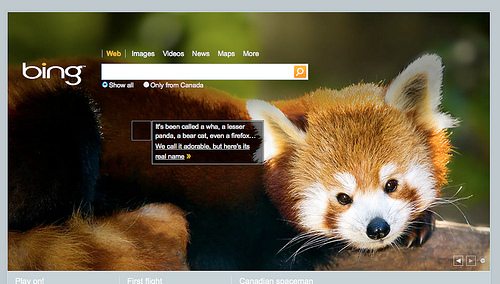 Only 24.7 per cent of web pages that appear on the first page of Bing’s search results are also included on the first page of Google, according to Searchmetrics. It seems that Google’s algorithm is a little more effective at identifying brands and separating them from non-brands.

Marcus Tober, CTO and founder of Searchmetrics, states that “brands rank in the top positions even if they don’t meet certain criteria that non-brand sites have to. For example, brand websites rank in the top positions on Bing and Google despite using keywords in the title or description less frequently, offering less content on average and having a lower number of internal links. These are things that non-brand sites have to do more of if they want their pages to rank well.“ Based on these findings, Bing and Google may be giving brands special treatment, helping them rank higher in search engine ranking pages (SERPs) as is alluded to by Tober. But Searchmetrics’ analysis indicates that the influence of brands is not as clearly defined on Bing as it is on Google“The brand factor mainly affects the very first position in Google’s results, whereas for Bing, it affects the first four to six positions. Bing is less sure about which sites belong to top brands and so deserve special treatment,” added Tober. In Bing search results, as with Google, the number of backlinks remains closely connected to how the page ranks. And while both Bing and Google try to reward pages that have a profile of backlinks that look natural, Bing is less rigorous about this than Google. Tober suggests that “it means a site should not simply have a large number of optimized links that include keywords it wants to rank for in the anchor text. It should have a proportion of ‘no follow’ links, which do not convey ranking benefits on search engines and links that contain neutral ‘stop-words’ in the anchor text.”  But the link profiles of high ranking pages on Bing are still significantly dominated by pages with both a higher proportion of links featuring keywords and smaller proportions of no-follow links, as well as fewer links with stop words. On average, 52-53 per cent of website backlinks ranked among the top 30 results on Bing contained keywords in the anchor text – ten per cent more than Google. And two per cent of backlinks ranked in the top 30 on Bing contained a stop word, while on Google it is ten per cent. Simply put, the number of backlinks is the most relevant metric for Bing, whereas the majority of other backlink features – no-follow links or the presence of stopwords in the anchor text – are not as relevant for rankings as they are for Google.  The quality of content on web pages is an important ranking factor because search engines are keen to raise the rankings of pages with good, useful information. Simply, higher ranking pages have more text. But on average, pages ranking in the top 30 Bing results feature about 100 more words than URLs ranking in the corresponding positions on Google. Bing also differs from Google with respect to how it values images – thought to be another indicator of quality content. In Google searches the higher the number of images on a website, the better the ranking in general. For Bing, in contrast, the correlation of the number of images is much lower. The study also highlights two other content factors that have a high correlation with ranking on Bing and Google; the number of ‘proof keywords’ and ‘relevant keywords’ on a URL that are related to the topic a searcher is querying. This backs up the idea that the search engine algorithms take account of keyword semantics and clusters of keywords related to a topic when presenting search results. Image source By Shané Schutte