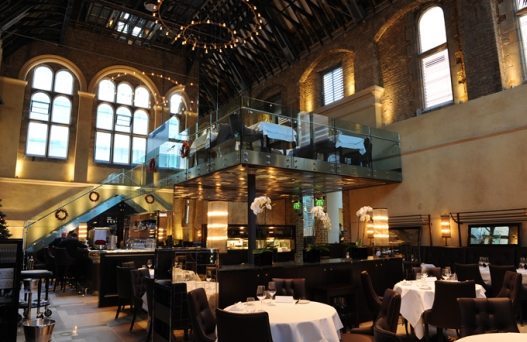 Galvin La Chapelle is the brainchild of the celebrated entrepreneurial Galvin brothers, and builds on the success of their earlier ventures (including being chefs at the Wolseley, the Windows restaurant, and others). Galvin La Chapelle received its first Michelin star this year. Address: 35 Spital Square, London E1 6DY Tel: 0207 299 0400

Probably the most famous TV chef around (sorry Jamie) and a true entrepreneur. Gordon Ramsay, his namesake restaurant, opened in 1998. It’s Gordon Ramsay’s first independently owned venture, and holds a whopping three Michelin stars and is frequently rated as one of the world’s best restaurants. If you’re eager to visit, you’d better book in advance: the restaurant only has 14 tables which seat up to 44 guests. And, as a bonus, it’s just round the corner from Real Business towers, so feel free to ask us along ? we’d be delighted to join you. Address: 68-69 Royal Hospital Road, London SW3 4HP Tel: 0207 352 4441

Pied ? Terre is one of London’s few restaurants to have been awarded two Michelin stars, which it has held onto since 1996. This independently-owned West End restaurant was established in 1991 by food entrepreneur David Moore, who was later joined by Shane Osborn as co-owner and head chef in 1999. Its private bar is ideal for a pre-dinner aperitif, and coupled with outstanding service, the dining experience is just fantastic. Address: 34 Charlotte Street, London W1T 2NH Tel: 0207 636 1178

The view from Rhodes Twenty Four is simply amazing. You can see the Gherkin in all its phallic glory while munching on Michelin-star quality food. Rhodes Twenty Four is, of course, owned by celebrity chef and entrepreneur Gary Rhodes, who opened the restaurant in? Set up in the City’s Tower 42 in 2003, Rhodes Twenty Four attracts both city slickers eager to splash their cash and real foodies. Address: Tower 42, 25 Old Broad Street, London EC2N 1HQ Tel: 0207 877 7703