We’ve barely started the year and yet much has happened thus far, with Donald Trump’s inauguration and his subsequent policies – like the immigration ban – grabbing countless headlines.

And then of course, there was our own prime minister Theresa May’s visit to see Trump at the White House in a bid to strike up a special relationship as the UK seeks friends amid abandonment of the European Union.

With all of that and more taking place in January, venture capital firm Beringea is well placed to assess the current state of affairs. Furthermore, McCormick has some unique insight as an American living in the UK.

Find out what the Beringea investment boss had to say below:

(1) Donald Trump was officially appointed president of the US in January. What feedback, good or bad, have you heard from SMEs on the development?

I am an American in the UK who still spends a lot of time in my home country and invests many millions of pounds into US companies. Trump’s “America First” campaign slogan was a precursor to his current protectionist attitude to policy-making.

The immigration ban is just one example: Trump has also taken aim at the EU as an economic trading partner seemingly preferring bilateral trade agreements with individual countries.

These changes in US attitude and economic policy could have far-reaching consequences for SMEs across the world.

Having said that, the tech industry as a whole has the opportunity to influence Trump’s thinking, especially if they work together, or withhold their collective approval. With the tech industry’s international outlook, UK companies certainly have a role to play here.

(2) In which ways will his presidency impact UK companies – if at all?

UK companies that trade internationally will keep a close eye on exchange rates. As yet, we don’t know what the consequences of Trump’s policies will be for the exchange rate.

His promises of business-friendly policies for US companies could mean a boost for the dollar, but his first few weeks in office have caused the US and international business community unease.

We have seen some currency fluctuation, and while there isn’t yet any imminent cause for concern, it definitely has caused nervousness in the wider business community.

(3) What should Theresa May seek from Trump for a UK-US business relationship to thrive?

Theresa May is stuck between a rock and hard place. With the uncertainty of what UK trade will look like post-Brexit, she had no choice but to get closer to Trump to lay the groundwork for a US-UK trade deal.

However, with the immigration ban announced barely a day later, her main priority now should be to obtain unrestricted travel for all UK citizens with the right visas in place.

Such reassurances were seemingly obtained but we are still seeing too many instances where UK citizens are stopped from entering the US despite having the right paperwork, but the wrong dual citizenship. The exchange of ideas and people is crucial for a thriving start-up community on both sides of the Atlantic.

(4) Which of the objectives that the prime minister laid out in her exiting the EU speech at Lancaster House do you consider to be the most significant for SMEs?

There is a disconnect between May’s speech and subsequent statements. Her number one objective in her speech was “certainty” – but when it comes to the right to remain for EU nationals, things couldn’t be more opaque.

One in five tech workers in the UK is from the EU. That ratio is probably even higher in the Beringea portfolio, so for us the ability to hire and bring in highly skilled overseas workers is significant.

May backs EU citizens’ right to remain – yet this will still form part of exit negotiations. Such a non-committal attitude fails to provide the individuals and business affected with the certainty they need.

(5) With a New Year ahead, how do entrepreneurs feel about the current condition of the British economy?

Despite the politically challenging climate, the UK economy has shown a definite robustness and has been performing better than expected. The announcement that Snapchat will base its international headquarters in London has further reassured the business community.

From a venture capitalist’s perspective, valuation multiples fell in Q1 and Q2 in 2016 but recovered in the second half of the year. We are sensing a positive attitude towards the British economy buoyed by the number of deals that are closing.

(6) Trade secretary Liam Fox visited Hong Kong and said: “The UK will be more internationally engaged than ever before”. In terms of SME exporting trends, and thoughts on overseas trade, what have you witnessed?

Across our portfolio we are seeing companies having great successes in Hong Kong and South East Asia. Luxury jewellery brand Monica Vinader, and adtech company Blis, are both doing very well in those territories. However, China and Japan remain a tougher nut to crack.

Because Beringea is based in the UK and the US, many of our UK portfolio companies expand to the US first before venturing East. I expect a strong dollar to boost such activity even further. Generally, we are seeing a lot more overseas trade activity across the portfolio with companies expanding internationally much faster.

(7) What would you consider the most important announcements from the World Economic Forum that SMEs should be ready for?

One of the announcements at this year’s World Economic Forum was around the desire to close the gender gap through quotas and technology. This topic is like a boomerang and keeps coming back. In my view, quotas or incentives for hiring women in higher ranking positions act as a temporary plaster and are only helpful in the short term.

The long-term objective must be that we no longer need to have conversations around women in business, women in tech, women in private equity or you name it. Collectively we must tackle the systematic issues that exist and prevent women from occupying these roles. 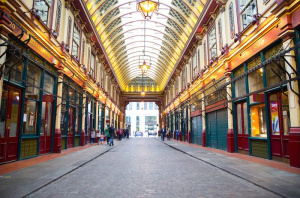 Why small businesses should consider buying property rather than renting