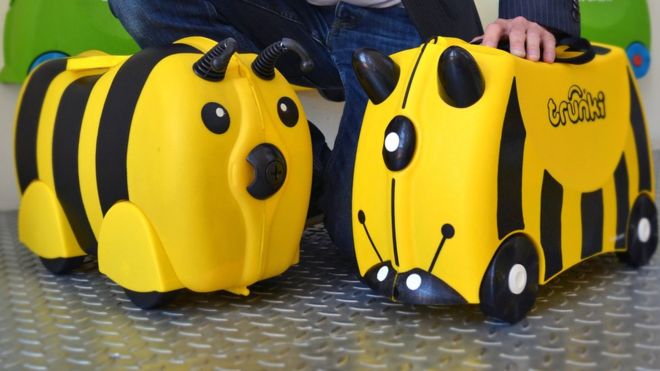 Share via
Having set up his business in 2004, and then famously took it on to BBC investment show Dragons’ Den where Theo Paphitis set about intentionally damaging his product, Rob Law grew Trunki grew to a position where it was exporting to 62 countries within six years. Legal proceedings began after Law believed Hong Kong-based PMS International had produced and was selling a product that infringed on Trunki’s registered design. In 2013, the British High Court determined that its European design registration was infringed, but that ruling was overturned at the Court of Appeal in 2014. Commenting on the latest outcome, Law said: “We are devastated and bewildered by this judgment, not just for ourselves but for the huge wave of uncertainty it brings to designers across Britain. “The law is meant to be about certainty. But this decision will create chaos and confusion among Britain’s design community, who have relied on a pan-European right which has been in place since 2002. There is meant to be parity across Europe. But this decision puts British designers at a distinct disadvantage from our European counterparts, whose courts have a far more robust approach to infringement.” Law described it as “effectively sending knights into battle without armour” if businesses cannot be protected by the registered design process that Trunki went through. The judgement was made by a panel of lord justices, with the president of the panel, Lord Neuberger, stating that the Supreme Court’s duty was to determine whether the Court of Appeal judge’s ruling had “erred in principle”. The full judgement can be read by visiting the Supreme Court website. Read more about the Trunki story: Tania Clark, partner and trade mark attorney at European intellectual property firm, Withers & Rogers, said: “While individual community registered designs provide some protection for the look and overall design of a product, and are relatively cheap and easy to obtain, they are not always enough to block rival products. “As the judgment points out, Magmatic was free, finances permitting, to obtain any number of registrations which could have protected both the shape and the surface decoration of its product in a variety of permutations. “What Magmatic was effectively trying to achieve in this case, on the basis of a single registered design, was the exclusion of a competitor’s design from the market. Given the differences in the designs, however, this was not enough.” “It is especially important that innovative businesses obtain broad protection of their work by using all possible IP rights – patents, trade marks and designs, at the earliest possible opportunity. “With relatively similar competing products in the marketplace, Magmatic will now need to focus on building its brand in order to maintain its market share.” Law has stated that, despite being unsuccessful in his legal processes, he would do it all again – despite the “time, expense and anguish of the last four years”. He believes it comes down to “protecting British designers”, key if they are going to continue to be “pioneers on a world stage”. A company’s intellectual property is one of its most important assets, so find out how to protect your ideas before it’s too late.