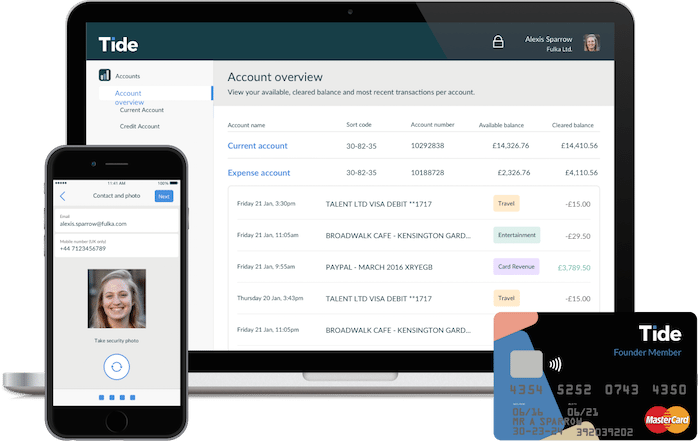 Share via
Tide has an offering where you can open a ?fully functioning? bank account for SMEs in about five minutes, without leaving your desk. I had a bank account for SMEs up and running, a new UK sortcode and account number there and then, access via my phone and a bank card on the way ? which arrived, as promised, a few days later with zero fuss. Fintech ? it has delivered. It?s not just my interest that?s piqued. When I briefly posted about this on LinkedIn it got an unprecedented response of over 10,000 views. Perhaps because, so far, fintech has promised much and delivered little, but this does seem to be the real thing and, while at an early stage, shows the potential. Ever wondered whether it was really necessary for the bank to make you jump through all those hoops for each card or?service, and waste your time, or whether it was avoidable? Well now we have the answer. And the thing that impressed me most at the time was the fact that (as I commented on the day) no one patronised me ? not once! To be fair, this was because I had yet to speak to anyone ? it had all gone pretty smoothly. However, when I did have questions I found a very different attitude to any bank I’ve yet encountered. A speedy, helpful and courteous response. The means for most of this is, as you’d expect built into the app – and my queries were answered in minutes. I’ve since also had the opportunity to meet some of the team and I must say that these may be bankers ? but not as we’ve known them. There seems to be a real focus and determination to provide the best possible services for small businesses and real enthusiasm about innovating to do so. George Bevis, Tide founder and CEO, said it is ?designed solely to meet the needs of small business owners? and wants to ?remove the pain points? they have previously faced. Eileen Burbidge, Tide chairwoman, Passion Capital partner, and the UK government?s special envoy for fintech, added: ?Having invested in more than 60 businesses in the past few years, my partners and I at Passion Capital know setting up and managing business banking efficiently is one of the biggest issues and source of frustration faced by SMEs today.? Tide also has an automated book-keeping service built-in that categorises transactions as they are made and allows users to upload supplier invoices, which will automatically prepare a payment ready to be made at the push of a button. Plus, the facility for users to create and send fully customisable invoices is all free. It should be noted that Tide, is not, technically, a bank. Tide deposits are held in a ring-fenced account at Barclays, which is of course a fully-licensed bank. Funds are moved around under an e-money licence held by PrePay Solutions, which is owned by Mastercard and Edenred ? which are themselves multi-billion dollar B2B financial services providers. The primary difference between an e-money licence and a banking licence is that banks can take investment risks with the money held in their accounts without any prior knowledge of the business owner, however e-money licence-holders cannot. So, for all intents and purposes, a small business can simply use Tide just like it would use a normal business bank account. What about the downsides? Well Tide does not take cash deposits. Not a problem for many businesses ? especially online ones. Beyond that it is early days, so there are a few other things missing, which may or may not matter to you right now. If you take international payments direct (rather than via PayPal, Stripe etc) to your bank account, there is an issue as Tide doesn’t have IBAN numbers yet. They tell me this will arrive in the coming months, along with lending and, perhaps, overdrafts. Another is that there is a re-authorisation process when you move to a new phone, which I only discovered when I did just that, so was out of action for a couple of days or so. Not too much of a problem if you know in advance, but could be if you don’t know that. At my suggestion, the nice people at Tide have promised to make this clear to people when they open an account. When did you last have a suggestion taken up by your bank? So, no overdrafts (at present), but so too no punitive and complicated fee structures to go with them. Fees are simple and seem reasonable and, above all straightforward ? 20p per bank transfer (using your card is free), ?1 per ATM withdrawal and no standing monthly/annual fees. Lastly, get this, Tide has a community! Imagine that, a bank not just allowing but encouraging their customers to interact, talk to one another and share suggestions and ideas. Plus, the coup de gr?ce (for us geeks) is an API, which they tell me will become fully functional and able to handle transactions over time. It?s read-only at present, but even so, members of the community have already begun to add features, so it will be really interesting to see where this will go. For those wondering if this is all pukka from a regulatory viewpoint, it looks pretty solid. While Tide does not sport a banking licence, so isn?t a bank ? not unlike PayPal and Stripe ? the technology and services are built on top of existing bank infrastructure. In Tide?s case, customer funds sit in a separate, ring-fenced account with Barclays, under FSCS protection, and they are partnered with card issuers to gain access to the MasterCard network. Overall a great start that will be very useful for many online startups and probably some others. I?ll be watching out for those IBAN and so the ability to take international payments – then it will be equally useful to many crowdfunders too. If Tide keeps going like this, it really will give the mainstream banks a run for our money.