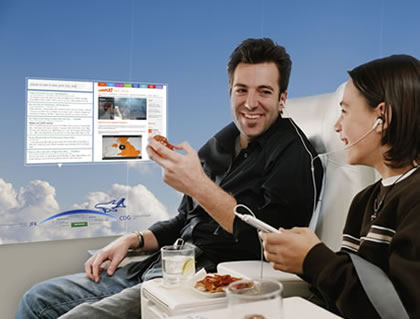 CPI, the Centre for Process Innovation, is a UK-based technology innovation centre. The company have announced that its OLED technology could eliminate the need for portholes, and allow passengers to simply stare out into the skies.

OLEDs, or organic light-emitting diodes, are a combination of various materials which, when activated by electricity, release their own light. By comparison, LDCs and plasma displays require a backlight. The flexibility of OLEDs and the fact that they’re lightweight makes them bendable and easily applied to a range of uses. The company said they could also be used to create roll-up phones and functional clothing. “Our role is to turn innovative technology concepts such as OLED displays into manufactured products,” research and development manager at CPI Dr Simon Ogier said. “Now we know we can tightly bend these parts and maintain function, the challenge is to combine this with an equally flexible front layer for a fully flexible, high performance display.” Flexible displays would not only create interactive and transparent airplane cabins: they would also be lighter, which means planes would use less fuel. CPI estimates that for every one per cent reduction in the weight of an airplane, there is a 0.75 per cent saving of fuel. Understandably, it will be some time before these technologies are implemented: CPI operates rigorous testing procedures. Which airliner do you think will be most likely to implement the OLED technology first?