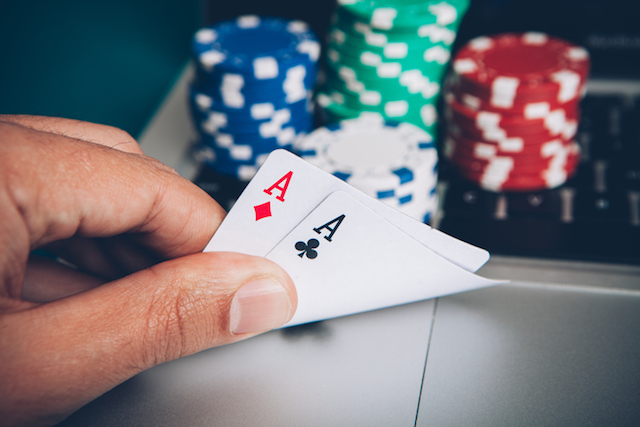 Share via
Didn’t think that discussions about the UK’s gambling industry were worth talking about over the Christmas period? Well, you thought wrong. Why? Because Christmas is a time for reflection, and the gambling economy is going through some exciting changes that SMEs can learn from. So sit back, throw another log on those festival flames, and read about the grand journey the British gambling industry has been on ? and where it looks set to head next year.

According to statistics from the UK Gambling Commission, there are 8,502 betting shops in the UK. Their 2018-2021 strategy report confirms the popularity of the industry, where a whopping 63% of the population gambled this past year. But how has the gambling industry become so popular? The answer lies in government culpability. Prior to 2015,?the rules on permitted development allowed high-street buildings to be converted into betting shops without planning permission. But following this date, change of use for a building to become a betting shop now requires planning consent. However,?this change came too late for many communities, where impoverished high-streets remain the ones most affected by the domination of betting shops.

“In Bradford, one in three people aged 16-64 are not in work and those that do work earn an average weekly income of just ?476. The city is home to 62 betting shops, and is the sixth most profitable local authority area for the betting industry outside London.” ? Nell Lewis, The Guardian, 2017

Where does it fit on the dying high-street?

This year, journalists, politicians and the media have begged us all to consider the fate of the humble independent?retailer. These small business owners are desperate for our custom, and we, as consumers need to start making a quick and decisive move towards using their services or else risk their extinction. So what do high-streets look like now? Many reports claim they’re made up of charity shops, and, of particular interest to us, betting shops. Betting shops or ‘bookies’,?spurred on by the recession of 2007, have taken the place of many independent?retailers, who could no longer cope with the high business rates. However, following Philip Hammond’s budget declaration that rates will be cut by a third for at least two years, perhaps this imbalance will not last. Small business owners appear confident that the de-escalation of business rates will help them survive on the high-street. This sentiment is supported by the director of Small Business Saturday, Michelle Ovens, who spoke exclusively to Real Business. She said the rates cap was “well received” by owners she met during her campaign trail.

The impact of ‘bookies’ on high-street health

It was back in December 2016 when UK politicians started stirring up awareness around the domination of betting shops on British high-streets.

“Today bookmakers remain very much part of our high-streets.” ? The Scotsman, 2017

But when we look at the British gambling industry in isolation, we can understand why their dominance came to be. The establishment of betting shops on British high-streets was started by prime minister Harold Macmillian back in the 1960s. The Betting and Gaming Act of 1960 sought to regulate and officialise the gambling industry by bringing it onto the high-street and away from backstreet setups. Essentially, there was a ‘devil-you-know’ mentality. Better, they thought, to have things like betting shops and casinos out in the open, where they could see and regulate them. Before this law, gambling was illegal, apart from on horse-racing tracks, where bets had to be made at their locations. Yet, only eight years after the law was passed, there were an estimated 15,000 betting shops in Britain. Fast forward to today, and the ‘bookie industry’ is far more established, where businesses operate in a more saturated and competitive market.

The interconnection between high-street poverty, communities with low socio-economic capital, and the prevalence of high-street bookies became clear when the UK’s unhealthiest high-street was crowned in November 2018. In the report, compiled by The Royal Society for Public Health, a ?Richter scale of health? was used to measure the wellness of shops and businesses. The litmus test for high-street unhealthiness included the existence of payday lenders, bookmakers, tanning salons and fast food outlets. Those deemed healthy, on the other hand, included pubs and bars, libraries and museums, pharmacies and leisure centres. Grimsby, a town with industrial connections in the east-midlands, was named Britain’s most unhealthy high-street. It is a place marked by shop closures, the prevalence of fast-food outlets, charity shops, and you guessed it, betting shops.

Is gambling good for the UK economy?

Gambling may be seen as a social disease by some, but it’s an industry that makes a lot of money. According to the UK Gambling Commission, it was worth??13.9 billion between October 2016 ? October 2017?in terms of the total gross gambling yield. This was an estimated 0.7% increase from the year before.

Online gambling is now the most lucrative sector within the gambling industry. Out of the reported 32 million gamblers in the UK, 18% of them gamble online. Some 29% of them gamble on mobile devices, according to the recent strategy report produced by the Gambling Commission. It claimed online gambling accounts for 33% of market revenue. In particular, casino games have been the most popular and successful, where between April 2015 and March 2016, revenue reached an estimated ?2.6 billion.

A broader customer base

A2017 PwC report?found that the average customer for online gambling in the UK is from a different demographic than those of betting shops. The average online gambling customer, the report says, is younger and more educated. What this reveals is that online gambling is an expansive industry that appeals to a broader demographic of customers than its high-street contingent. This makes it an industry worth investing in, some argue.

The gambling industry has been defined by billion-pound mergers during the last few years. An example is Paddy Power, a gambling company that started in shops in Ireland and eventually created a digital arm in 2007. In 2016, the company proposed a $5 billion?merger with digital upstart Betfair, which started online in 2000. By focusing solely on online gambling, it became the world’s largest betting site. Paddy Power recognised the significance of partnering up with a ‘digitally native’ brand, and?Paddy Power Betfair was the result of this particular merger.

This is part of a wider trend in the industry that’s seeing traditional ‘bricks and mortar’ betting brands partner up with others. This comes as part of an industry-wide need to scale up and innovate due to increased regulations on physical stores.

“The Paddy Power Betfair group’s focus on technology comes as its internet business grows faster than its retail arm made up of high street betting shops. Online revenues increased 11% to ?853 million last year on a constant currency basis, while retail revenues were up 6%.” ? Murad Ahmed, FT 2017

These mergers come at a tricky time for the gambling industry, where the government is considering putting a ban on the number of betting machines in shops. However, what this all points to is that gambling brands need to go online permanently.

What SMEs can learn from online gambling

Whether you think gambling is a mortal sin or evidence of a thriving business sector, there are lessons SME owners can take away from them. (1)?Accessibility: Online gambling brands have worked hard to make technology easily accessible via mobile devices. This includes limiting downloading options in favour of instant access to online gaming. Whatever product or service your SME sells, your customers are more likely to stay on your site if it loads instantly and if your services, whether that’s a gallery of products or form filling, are easy to access online. (2)?Customer incentivisation:?Many online gambling brands do not apply charges to new registrants, they also incentivise players through increasingly generous and innovative rewards, such as increasing the amount of free gameplay that is made available. You can apply these methods in abstract to your own business. This could include free subscriptions to newsletters containing important industry information about your sector or simply product deals online. For physical retailers, linking your online site to your physical store is important, and this can be done via news about pop-up events and the like. (3)?Free entry: Especially if you’re operating in the gaming industry, doing away with upfront payment first subscriptions can increase consumer traffic and interaction with your site. Even if your business does not fall within this industry, you can apply a similar ‘free gifts’ mentality to customers that interact with your business. Whether that’s throwing in a complimentary token gift with purchase (if you’re an independent retailer) or doing so online, you’re bound to get more customers through the door and spending more.