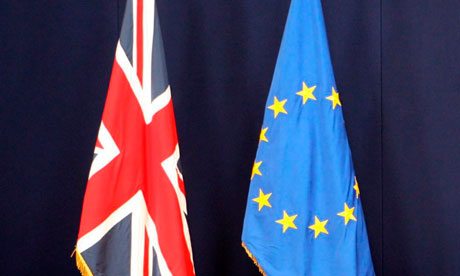 UK consumers are sceptical of EU membership and half would vote to leave the EU tomorrow, according to new research from consultancies Lansons and Cambre Associates.

But most business respondents believe being in the EU is a net positive for their businesses and were more emphatically positive about the single market areas of the EU. The new report, created by Opinium Research, analyses consumer and business sentiment surrounding the EU and compares it to research from Germany, France and Poland. The report reveals that British respondents are significantly more negative about European Union membership in comparison to their European neighbours. Fifty per cent of UK voters would vote to leave in a referendum held tomorrow, with 36 per cent voting to remain.  UK residents are evenly split over whether leaving the EU would make the UK more or less attractive to international companies (26 per cent saying more and 26 per cent saying less) but, again, 32 per cent said “about the same”. Ease of doing business The findings are despite the fact that British citizens see individual aspects of EU membership, such as tourism, travel and ease of doing business as positives. Businesses in the UK are considerably less Eurosceptic than consumers. Forty-seven per cent of businesses see EU membership as a good thing (vs. 26 per cent of consumers). Larger businesses of different sizes with respondents from large companies (250+ employees) are also generally more positive than those from smaller companies, particularly micro businesses (0-9 employees). Micro business respondents were almost evenly divided on whether EU membership is good (38 per cent) or bad (40 per cent) compared to far more positive larger businesses (57 per cent good, 16 per cent bad).  Similarly, on whether membership currently has more benefits or drawbacks, micro businesses were negative (30 per cent more benefits, 48 per cent more drawbacks) than large ones (46 per cent more benefits, 22 per cent more drawbacks). Most businesses view the impact of EU membership as positive or neutral, with just a fifth saying it has a negative impact on their business. Again, positive feeling is most likely among those with 250 or more employees (43 per cent positive, 17 per cent negative) but this is true even among micro businesses (28 per cent positive, 19 per cent negative). UK business respondents are also more positive about individual aspects of EU membership than the general public. Business respondents were more emphatically positive about the single market areas of the EU, with 68 per cent viewing the lack of customs, duties or tariffs between member states a benefit and 42 per cent see a common set of rules for business across the EU as a benefit. Thirty-eight per cent of business respondents view the idea of free movement of workers and citizens across the EU as a benefit. British business respondents had a more rounded view of the Single Market and were positive about every aspect of EU membership except subsidies (such as the Common Agricultural Policy) and EU rules on workers’ rights / restrictions. “Britain last held a referendum on its membership of the European Union in 1975 and on that occasion 67 per cent of the electorate voted in favour of staying in. Approaching forty years later controversy still rages over Britain’s EU status and the effect of it on the nation’s economy and social fabric,” says Andrew Silverman, head of public affairs at Lansons Communications. “The difference between then and now lies in the vastly increased scope of the EU, both in terms of its competences and membership. This and the Eurozone economic crisis have brought Britain’s membership into sharper focus, along with questions over the rationale for the EU Commission, Parliament and attendant institutions.”