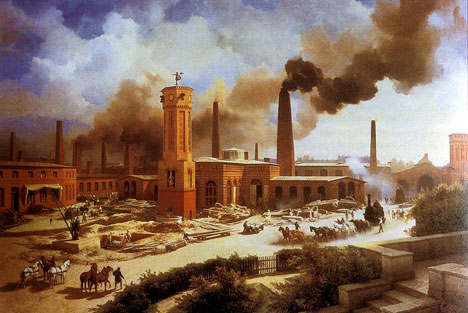 How apt it is that Britain is the frontrunner to the revolution when it was the birthplace of the first one, which took place between the 18th and 19th century.

It’s been said that “a number of factors contributed to Britain’s role as the birthplace of the industrial revolution. For one, it had great deposits of coal and iron ore, which proved essential for industrialisation. Additionally, Britain was a politically stable society, as well as the world’s leading colonial power, which meant its colonies could serve as a source for raw materials, as well as a marketplace for manufactured goods. “As demand for British goods increased, merchants needed more cost-effective methods of production, which led to the rise of mechanisation and the factory system.” Pam Murphy, COO at Infor, suggested that this time around, the revolution would be about connecting an increasingly rich and diverse set of information and using it to unlock new insights.  “Through embracing the technological change required to achieve these insights, UK manufacturing is well placed to enhance its reputation for productivity and service-led innovation, cement its platform on the global stage, and take a leading role in this new revolution,” she said. This is something that manufacturers up and down the country agree with as well. A recent EEF research found that 80 per cent of manufacturers expect their business to be affected by 2025, with 88 per cent saying the UK should be taking a leading role, seeing clear benefits to the sector and the rebalancing of the wider UK economy. Almost seven in ten say the rapid advance in technology will play to Britain’s strength as a high value manufacturer, pointing to benefits such as the ability to produce bespoke products (56 per cent) and for more cheaper and rapid prototyping (52 per cent). Read more about bespoke products: The trend for reshoring is also set for a boost, with 50 per cent saying that industry 4.0 will enable more production to be brought back to the UK. However, the UK’s ability to lead the pack hangs in the balance. “The next decade will bring great and rapid change and the early-adopting nations will maximise the opportunities presented by new technologies and thrive as a result,” said Terry Sculler, CEO of EEF. “There will inevitably be winners and losers, which is why we should take note when manufacturers say there is a real danger of the UK being left behind. “Our sector’s ability to remain on top of the fourth industrial wave hinges on the decisions made now and over the next decade by consecutive governments. We must continue to establish the foundations to support our manufacturing renaissance, particularly alleviating the pressure that industry 4.0 will place on investment and skills. It is vital that the government steps up to this challenge and works hand-in-hand with manufacturers and academia to ensure that the UK is not left behind.” In a stark warning to the next government six in ten manufacturers said that the UK is in danger of being left behind. With Industry 4.0 set to become reality within one investment replacement cycle, seven in ten see the levels of investment required as the key challenge. Other concerns are the impact on the supply and demand of skills (59 per cent) and keeping on top of technological advances (58 per cent). As a result, over three quarters of manufacturers want to see Government, industry and academia working together to secure the UK’s role in the fourth industrial revolution – 85 per cent agree that Britain needs a long-term industrial strategy spanning consecutive governments if it is to capitalise on the opportunities. Industry 4.0 will change the global face of manufacturing beyond recognition. The UK must take a leading role if we are to realise our ambitions for a healthy, balanced and growing economy.  By Shané Schutte Image source