According to the latest research from the Federation of Small Businesses (FSB), which comes ahead of an expected hike in interest rates by the Bank of England, 42% of small sized firms described new credit as “unaffordable” in the third quarter.

Perhaps as a result of these levels, only 13% of small firms made applications for new finance over the period.

Of those, 38% applied for bank loans, 30% were seeking asset-based finance and 16% looking at crowdfunding. Nearly 10% were seeking new funding from peer to peer platforms.

Wider analysis revealed that half of small firms are “permanent non-borrowers”, with almost three quarters saying they would rather grow their business more slowly than borrow to enable faster growth.

FSB national chairman Mike Cherry, said: “A lot of small firms will have been preparing for higher interest rates. However, with borrowing costs for small firms already high, it’s critical that any future rate rises are carefully considered and gradual.

“A good proportion of small businesses will welcome the prospect of higher rates taking some heat out of price increases. Consumer inflation has been consistently above 2% for months now with input costs, especially fuel, also on the rise.”

He said this inflationary pressure has proved quite a challenge for small firms such as retailers who are also facing the pressures of high employment costs and spiralling business rates.

“We need to see a fundamental shift in the UK’s small business finance culture. Too many firms are reluctant to borrow and realise their full growth potential. Those that do are too reliant on traditional debt products,” said Cherry.

“We could learn a thing or two from the US where equity finance is booming. UK firms need to be encouraged to recognise that this kind of investment can bring not only growth finance, but also advice and support from those with real expertise.” 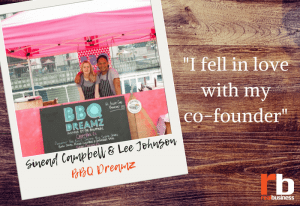 BBQ Dreamz: This is all about us trying to build something together