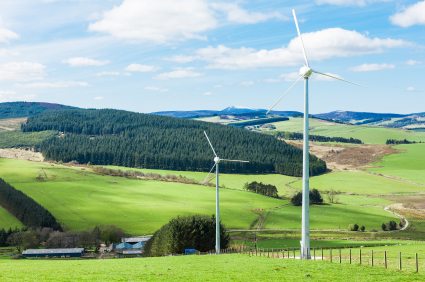 Don’t go to the ?Rumblin? Tum? in Edinburgh?s drab Corstorphine district if you want a glass of water. It?s one of those small businesses that doesn?t welcome customers with much smiling enthusiasm (kind of important) or indeed, with fresh water. ?Ah canny gie ye that sir, oor watter isnae mains,? said the staff member, offering instead tepid kitchen supply, or of course, plastic-bottled water, the refreshment-of-choice for those sniffy about fresh tapwater. I did without, and slurped the soup instead.

We were going along to ask our MP to support the Energy Bill amendment calling for an enforceable target for CO2 emissions. Our MP – with a marginal seat in the shaky coalition – was about to attend the formal opening of the Green Investment Bank in town, and he promised to ask them: if a target was an essential clause for them, he would back it. The GIB is supposedly locating in Scotland because of the renewables industry here (investment doubled last year to ?1.5bn). Big operators, like wind farm developers Iberdrola, or Alstom, which commissioned Europe?s largest wind energy farm near Glasgow, might well be clients of the bank. But it?s less likely to sign-up smaller operators who make up the SME cohort. Yet it is the smaller firms that are apparently doing particularly well in Scotland?s abundant renewables climate. Olivia Errey works in carbon capture research (where they scrub the carbon dioxide from power station emissions and store them somewhere permanently so they don?t contribute to climate change.) She says the reason why Scotland is especially good for renewables is that it’s relatively underpopulated, very windy, with a jagged coast line of firths able to provide tidal energy very effectively: ?Not many other countries have such suitable areas. It’s been called the ‘Saudi of the north’ for marine power for this reason.? But who?s going to pay for the investment? In a report for the Scottish government, consultants Sinclair Knight Merz reckon ?35bn will need to be spent if Alex Salmond?s ambitious target of 100 per cent renewable energy is to be achieved by 2020. And the required sub-sea connectors to supply the ?leccy are yet to be built: ?It is highly questionable if three (?) subsea links or interconnectors could be installed by 2020.? Yet the Nationalist administration is determined. And it?s that political backing which is giving the startup renewables businesses confidence. One such firm is FloWaveTT, wholly owned by the University of Edinburgh, which is building a wave power testing tank to simulate ocean conditions anywhere in the world and assess them for potential energy capacity. The whole thing will cost ?10m and have space for ten staff.