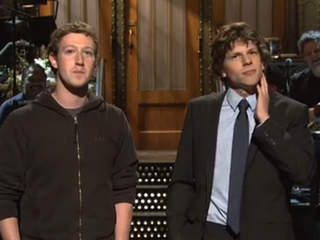 In the opening monologue of SNL, Facebook’s Mark Zuckerberg appears alongside another Mark Zuckberg: The Social Network‘s star Jesse Eisenberg. Mark Zuckberg garnered quite a few laughs from the audience with some of his quips (“I invented poking!”), but perhaps the segment could best be described as… a little awkward. Watch the video for yourself here: