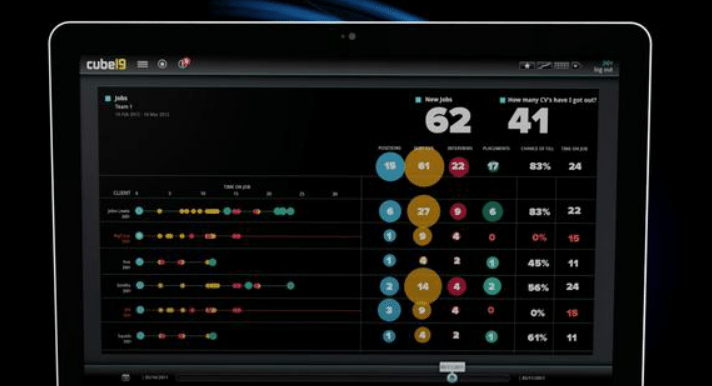 Share via
cube19, the visual analytics startup launched in May 2012 by Growing Business Awards Young Entrepreneur of the Year winner Dan McGuire, announced today that it has raised $1.75m (?1.1m) to bring sophisticated cloud-based business intelligence (BI) and predictive analytics to the global staffing and sales markets. The funding comes from a group of private investors including the CEO of SThree plc, Russell Clements, who joins the board as non-executive chairman, entrepreneur Graham Palfery-Smith, and the executive chairman of Hydrogen, Ian Temple. The sum raised is in addition to a substantial amount of seed capital provided by McGuire himself. cube19?s product provides optimised, real-time information to individual users irrespective of location or device, meant to?drive fact-based decision making at all levels of business.?The application features advanced visualisation techniques and incorporates an interactive and highly graphical user interface, to pinpoint only the information a user needs to see at any time, conveying significant amounts of data in just a couple of seconds. McGuire, who previously built Broadbean Technology into one of Europe?s fastest growing tech firms before selling it to DMGT, said of the fund raise: ?We set out to create a product that is genuinely different and I believe we?ve done that. Understanding data quickly is a huge challenge so turning it into a picture helps the user interpret and more importantly use the vast amount of information that is all around them.? Incoming chairman Russell Clements recently announced his intention to retire from SThree in 2013 after 26 years. He said the decision to join cube19 is the first step in a plan to build a portfolio career, saying, ?cube19 is a technology startup with a truly innovative business analytics product that has many potential applications. I?m looking forward to working with Dan and the team to help accelerate the growth of the business.? cube19 was recently listed in in the 2012 Startups 100 as one of the most innovative and disruptive new technology companies in the UK. Dan McGuire was named Young Entrepreneur of the Year at the Growing Business Awards 2007. You can find the 2012 Young Entrepreneur of the Year shortlist for the Growing Business Awards 2012,?hosted by Real Business and the CBI,?which will be held?on November 27, 2012, at the London Marriott Grosvenor Square.