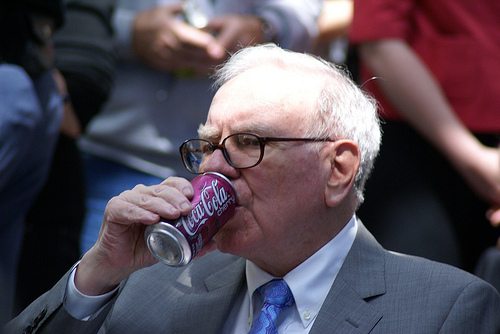 Share via
Cherry Coke may only have been available in China since March 2017, but in other countries it’s gathered quite a following and Warren Buffett tops that list. Talking to Yahoo! Finance, Buffet explained that China’s Coca-Cola asked to put his likeness on Cherry Coke cans for a limited period of time an offer he said yes to. “I think it was?due to aninterest in stocks that has developed overA couple of decades. I also made some visits that received a fair amount of publicity.” It?turns out Buffett is partially right. “Business leaders tend to have an outsized following in China, in some cases greater than that of sports stars,” China Market Research Group founder Shaun Rein said in an abc News post. “People like him and Jack Ma have cult status?because of their success.” This, according to one tweet,?puts Buffett on par with Beyonc :

Apart from being a rock star, his investment firm, Berkshire Hathaway, is Coca-Cola’s biggest shareholder. It’s also safe to say the companychose him due to his absolute love for the drink, which was displayed at its best during a Q&A session in April 2016. For starters, it began with him opening a can of Cherry Coke. When he was asked to defend his stake in Coca-Cola, Buffettexplained he was “one-quarter Coca-Cola”. He drank five 12-ounce servings every day?” so why wouldn’t he have a stake in the companyBuffett added: “I consume 700 calories a day. It is a marvellous?product.” He followed this up with statistics“from the Census Bureau, saying 10,000 men in the US lived to be 100 years old or greater, compared to 45,000 women the audience brought”his health into question. “If I?really wanted to improve my?longevity prospects I’d think of having a sex change. There has been noevidence convincing me I’m?more likely to reach 100 if I suddenly switch to water and broccoli.” So, who better than Buffett to help launch Cherry Coke! Shelly Lin, Coca Cola’s marketing director, said as much. ?We thought of the most creative ways to bring Cherry Coke to China, and there’s no?better way to celebrate its?launch than through its best-known fan. We were actually surprised heAgreed to the idea. But we re thrilled, and he’s selling well.” In fact, Buffett claimed he was doing it for free, and were he to be asked by CEO”Muhtar Kent to continue the promotion of Cherry Coke, he would say?yes again. By Shan” Schutte