In the 1970s, comedy duo Eric Morecambe and Ernie Wise dominated the British TV schedule. Their Christmas Show was watched by some 26m people and to participate was the crowning moment of glory for celebrities. Much of what Morecambe and Wise did was designed to look like mistakes had been made, which always cast the famous guests as hapless fools.

At the height of their fame, Morecambe and Wise interspersed the sketches with little vignettes of various celebrities showing how their careers had taken a dive since appearing on the show. “I appeared on the Morecambe and Wise show, and look what happened to me…”. The camera would pan back from the famous face to reveal them now as a road sweeper or a lorry driver – fallen from grace.

Of course, the artifice was that each celebrity had been propelled even further up the fame index. Mistakes can sometimes be very profitable. We all make mistakes. The trick is to make the mistakes work for you.

However lowly and unambitious an individual client might be, they will probably move from organisation to organisation. You want them to take you with them. You want them to be a fan. Don’t go over their head or try and subvert them or ignore them. Help them. If, as happened with one of our clients, they are going to another job, help them anyway you can – they will remember it.

I once worked with someone with whom I fell out with dramatically. Two years later, there he was, being introduced as my new client. Luckily, he had more grace than I had shown and agreed to bury the hatchet. I try not to make enemies now. Instead I try to make fans – they prove more profitable.

Hunting alone is dangerous. Caffeine was founded by three people who had very different personalities. Initially, we hunted alone, so we missed sales opportunities because it was hard to listen, observe and talk all at the same time and, if a client didn’t like the one of us they were meeting, the sale was lost. We had better strike rates when together. Hunt as a pack not alone, if you can.

Act in haste repent at… pace

In business you can’t afford to repent at leisure. If you have made a mistake and you know it, act. We made a couple of investment decisions which started going badly very quickly (both were led by impulse rather than by plodding, thorough diligent interview or investigation which is much the best way).

In one case, we couldn’t bring ourselves to bite the bullet and we kept pouring good money after bad. In the other, we stopped the new venture after only three months. If it really isn’t working, stop doing it straight away and have the painful conversation. It is cowardly not to do this and it is also expensive.

Play nice – stick to your principles

We were advised to hit low and hit hard whenever someone infringed our trade mark. When we came across another consultant using the Caffeine name, we were urged to go heavy immediately and threaten legal action in the first contact. We duly did. The consultant concerned took great umbrage and said “why didn’t you just ask me nicely? ”

A few years later we came across a PR company trading under our name. This time, learning from our past experience, we called them and pointed out politely that they were infringing our copyright. As we offer naming as part of our offer, we asked to help them find a new name. They accepted and we resolved the issue amicably – no lawyers need be involved. It doesn’t matter how experienced the advice is, if it contravenes your core principles, it is wrong. One of our founding principles is to act from heart and conscience. We do business nicely.

Pay the company, not yourselves

Pay yourselves in a way that grows the business not your personal bank account. We spent too long going around paying ourselves selfishly for the work we did.  It makes you greedy and you don’t share the engagements together because you want to maximise your personal income. Don’t do that – travel to clients together.

Do the job as a team. It’s more fun and the work will be better. You also won’t spend weeks away from your family, in foreign restaurants and hotel bedrooms dining alone. If the company gains, you will gain so be greedy for the long term not the here and now.

Know when to quit the stage

Clients can fall out of love with you. They get to thinking they need a new face around. Maybe you have given them all you have to give. Whatever the reason, be grown up. Don’t cling on fooling yourself you can win them round if you are constantly getting signals they want to play with someone else. Have some pride. Assess honestly if you can really still help them. If you can’t, find a way to leave graciously. Back to the first mistake: stay friends, stay in touch and live to fight another day.

We love our clients to say, “We worked with Caffeine and look what happened to us…“. Mostly, they aren’t sweeping roads. We’re not as famous as Morecambe and Wise, nor as funny. But we hope we are just as effective at doing what we do as they were at their specialist subject. Mistakes are like clouds – the other side of them brings you sunshine. And all the best businesses bring a little sunshine into the world.

David Kean is co-founder at The Caffeine Partnership, who writes books and talks all over the world about personal and business growth. 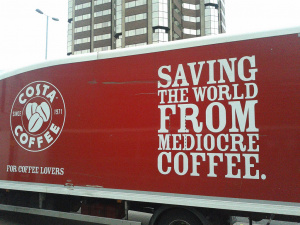 How Costa, Starbucks and Caffè Nero should tackle reputational damage

It’s time to drastically rethink our interpretation of financial knowledge