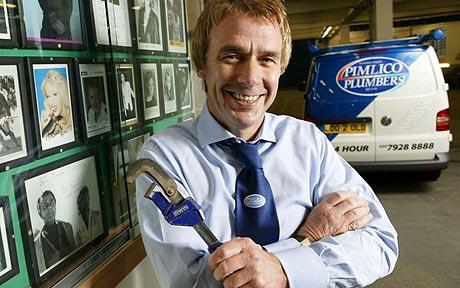 You wouldn’t believe the amount of stick I’ve been taking from all directions since I dared to suggest that putting up VAT was something that had to be done.

It started before I’d even left work on the day of the Budget, with some of my plumbers questioning my sanity and people I know ringing up to see if I’ve lost all my marbles. Things got worse later on when I appeared on London radio station LBC giving my thumbs up to the Budget. But I don’t care what anyone says, the facts speak for themselves: we’re skint, broke, completely and totally brassic! As I’ve been quoted this week, raising VAT is a no brainer. I’m like everyone else, if I had to decide between keeping more of my company’s income or handing it over, the choice would be simple, but it’s not the case this time around.  Although it’ll hit my firm and lots of other companies too, it’s a case of staying in business or going out of business. And when you’ve got no money, anyone with an ounce of common sense stops spending what they have, and especially what they don’t have, and tries their damndest to get some money in. Now, what I don’t understand is how people manage to lose that sort of common sense just because the scale is several millions of times bigger. Just because the UK owes shed loads more than a one-man-band whose business is going broke, where’s the sense in saying that it’s okay to keep on going on the never, never? I’m told there’s a load of flash economic theory that says that spending is the answer, but someone else told me one of the blokes who came up with that theory also wasn’t big on worrying about the future, and was keen to point out that we’d all be dead one day. Well, let me register my intention to live long enough to see a full recovery and enjoy many more years of prosperity!