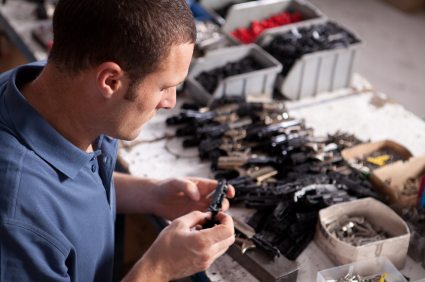 Share via
Careful now: are we talking ourselves into another downturn? Recent mixed results about the state of the UK manufacturing sector raised fears of an industry decline, but various manufacturing SMEs are still predicting future growth. They are who we need to focus on. Results of the National Barometer report, released by the Manufacturing Advisory Service (MAS), confirmed that sales are still increasing for 53 per cent of respondents. Nevertheless, problems in the marketplace are visible, with only 40 per cent of respondents seeing an increase in enquiries, compared with some 49 per cent in the last Barometer. Investments in new machinery and premises are also down. This alone, though, should be no reason for doom and gloom. The results are no surprise in the face of recent economic forecasts, attested David Caddle, MAS area director. ?Historically, it takes a little longer for the slowdown to cascade its way down the supply chain and to the smaller companies.? ?However, we have to make sure we don?t talk ourselves into another downturn. The Barometer features responses from key decision makers at over 700 companies, representing more than 28,000 employees. It is carried out quarterly, giving us a smoother picture of sentiment as opposed to some monthly findings that can be swayed by external influences, such as the Jubilee. And the majority are saying to us they are growing and expect this to continue over the next six months.? The National Barometer was conducted for the second time, this year focusing on export. Despite turmoil within the euro zone, some 71 per cent of firms are aspiring to increase their operations overseas, with more than one in ten expecting to boost turnover by 50 per cent between now and 2013. ?Exporting has been a key driver in the upsurge in manufacturing and this shows no signs of changing, even with the euro zone in turmoil,? Caddle said. Doomsaying won’t help the sector thrive. But both the encouraging numbers in the National Barometer and the downbeat results of reports such as the recent CBI survey carry their weight. The danger lies in focusing too much on one or the other. Despite the inspiriting results of the survey, issues in the sector remain. Securing competitive production costs was listed as the biggest worry, with after sales support and meeting different international standards the other most common concerns.