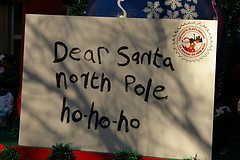 Will they be ending the year on a high, after being lavished with generosity and good tidings? Many small businesses continued to struggle in 2013. Be it with securing finance or finding new customers, they can only hope that things improve for them this year.

But if Santa really could deliver the Christmas gift of their dreams, here are a few things they would have wished to find under their trees?.

Last year has seen further evidence of banks mis-treating their business customers and small businesses have certainly been at the forefront. Mis-selling has become a common term, with very few people surprised to hear of yet another ?banking scandal? or fine. Banks will need to become more supportive of their business customers to build trusting relationships, rather than seeing them merely as a ?sales target?.

Despite many members of parliament claiming to be pro-business, there is still a strong feeling amongst SMEs that those with the power are not doing enough to support the small businesses that contribute so much to the economy. Active members of parliament who have really experienced the challenges of starting and running a small business can really help ensure that SME?s are given the priority they deserve.

Since its inception in Spring 2013, the FCA has seen its fair share of issues and scandals to manage. What has been a worry is its reluctance to encourage small businesses to seek professional advice for issues such as mis-selling claims against the banks. If only they would see that by securing professional advice, small businesses would be in a better position to challenge the banks.

Granted, this is very unlikely. But with stories of big businesses being let off the hook for what appear to be huge tax bills, small businesses do not feel they have been given the same treatment. On the contrary, they feel that the tax and administration regime is a weighty burden, which undoubtedly puts off some new business start-ups. Any opportunity to reduce the cost of running a business would unquestionably be a good thing for all concerned! Alison Loveday is managing partner at independent law firm, Berg. Image Source