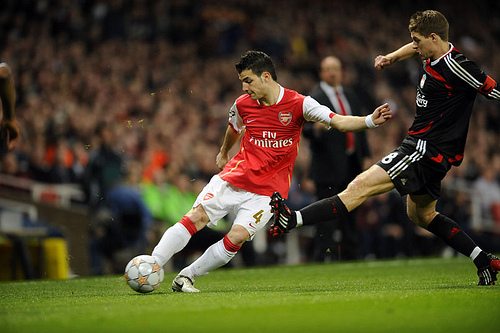 I declare an interest: I’m an Arsenal fan. As someone who cares deeply about business leadership and the development of people, the ongoing saga of Arsenal selling top players fascinates me.

Firstly, having built a multi-million pound business from a back bedroom beginning, I share the view that, after the initial excitement of making a lot of money has died away, it’s seeing people develop and grow in your organisation which gives lasting reward. After selling Robin Van Persie, Arsene Wenger admitted something similar when he said: “I believe part of our club is to influence people’s lives in a positive way.” Of course he’s right, for the list of players who made their name at Arsenal is long.
However, I don’t believe that Arsenal would have wished to sell their key players either.
So, which route does a business leader take? Should you raise finance to hire the best players and pay them vastly increased wages? Let’s not forget that Van Persie’s deal was not £24m, but a package which will cost Man United around £64m due to four years of wages (no doubt payable whether injured or not). Or are you best advised to keep finances tight and focus on developing your people, like Arsenal? Just as Manchester United and Arsenal represent these two strategies, so each business leader needs to choose one. I accept, of course, that Man United develop players and that Arsenal buy players too, but their actions suggest that one is first and foremost a buying club and the other a developing club. From a business perspective, Manchester United have laid a huge £64m bet: that Van Persie will maintain his form of the past year and not get injured. Arsenal, on the other hand, have just avoided a hike in pay that would lead to all players demanding more money, which might have added hundreds of millions of pounds to their pay bill. The fascinating point of this saga is that you can’t divorce talent from rates of pay.
Arsenal are taking a more cautious and reserved strategy – they will remain the pre-eminent club for developing young players and therefore will always be a club of choice for players who wish to advance. Hence, there is very little that will knock Arsenal off their current top four rating and a trophy or two will transform their summer transfers. So, for Arsenal, the only way is up. Man United, on the other hand, have taken an expensive gamble. Perhaps, as suggested, because Alex Ferguson, who only had a few years left, was less worried about the results of the gamble going wrong. It’s possible that both clubs will succeed, but it seems to me that Man United have taken a far bigger risk and Arsenal have just reduced theirs. Which path should you and I choose? To develop our people or just buy the best ones with a large cheque book (having raised money from someone else’s pocket)? Each of us will have a view, but for me, real business satisfaction comes from seeing people grow and develop – profit and increasing share values alone are not enough. Perhaps for Wenger and his training staff, trophies alone are not enough either. John Maxwell said, “The greatest leader is willing to train people and develop them to the point that they eventually surpass him or her in knowledge and ability.” Who are you developing? Neil Lewis advises start-ups and high growth companies through his marketing and leadership consultancy, Media Modo and is the author of “100 Rules for Entrepreneurs”. Image source