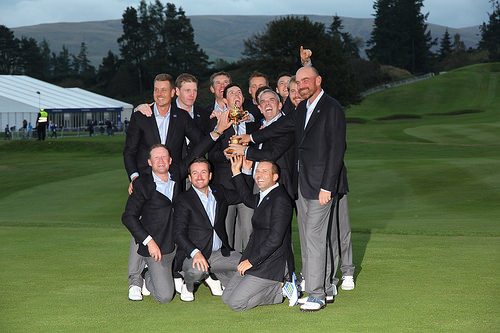 When team Europe headed to the golf course to take on the USA in the biennial Ryder Cup, leadership was everything. The end result ultimately came down to the players sinking the putts, but for that to happen effectively their mood, motivation and readiness needed to be at the highest level. And it is the captain who has a surprisingly critical influence to make sure this is the case.

From before he was appointed captain, Paul McGinley’s every thought and move was designed to create such a platform for his European team. He was faced with the challenge of leading multi-millionaire sportsmen, all highly successful individuals, for whom there is always next week to provide opportunities for glory and remuneration. The theory goes that they shouldn’t need motivating to perform at the Ryder Cup. It is after all the biggest show in golf and commands the game’s largest television audiences. But at the competition, one side quickly proved far better prepared for the task and was seen to act as a strong cohesive unit. That team was Europe and McGinley?s role in leading that team was quickly praised by commentators across the board. How many business leaders can currently be described as meticulous, intelligent, inspiring and articulate? These were the qualities that McGinley demonstrated in abundance and that served Europe so well. Of course McGinley’s role was slightly different to the role of a classic business leader, but there are fascinating reflections and learning that any leader can take from his approach. McGinley managed to provide a platform for the individuals to be at their best, to play freely and achieve greatness in the heat of the moment. From a group of players who spend their lives competing as individuals, he managed to create a passionate united team; one that supported and encouraged each other and grew together.? So how did he do it? Much of the detail remains unknown to us but there are four key aspects of his philosophy that are very apparent, and that any leader can learn from.

He worked tirelessly to get to know every one of the team personally. He understood their strengths and weaknesses and more importantly he built strong relationships. He understood and cared for them as human beings. Along the journey, he kept them in the loop on everything. The output was that all players deeply respected and trusted their leader, even when he made decisions that they didn’t like.

He chose the right people for the right jobs. He put huge thought into player pairings and pair relationships. By selecting the best people in the best pairings, he formed mini-teams (pairs) that really worked.?

He avoided any complacency. Every possible element that would impact his players’ game was thought through. This was the bedrock of helping the players feel relaxed, taken care of and feeling that they were part of something special. It enabled them to fully do one thing – to focus on playing their best golf.?

He developed an incredible team spirit – a unity that could overcome anything. The team truly became one, not a group of individuals. This is an example of a truly high performing team, one where the members are so deeply committed to the team’s aims and to one another’s development and success, that individual identity becomes irrelevant. The commitment elevated the team’s performance and something remarkable was achieved. The fulfilment and pleasure of being part of such a team is life-changing.? These are the attributes and focus that should be seen in more CEOs. Imagine a leader who was deeply committed and passionate about creating a platform for his key people to achieve their best. A leader who is intent on creating a truly high performing and united leadership team.? Too often we get the opposite – leaders not understanding and developing their people, destroying motivation and creating fear, and teams with the wrong players in the wrong positions, with conflicting agendas and motives, and a ?silo mentality? not to share information. It’s time to take heed of the inspiring example we saw on the golf course and to take a moment to think about leading the McGinley way. Martin Palethorpe is managing director of The Pragma Group, a leading UK-based performance consultancy.? Image source