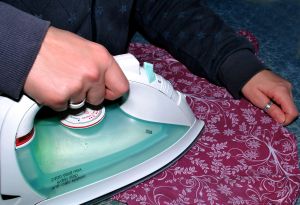 Recently, and without a great deal of thought, I bought a new iron. I didn’t want to buy a new iron. Who does? It wasn’t a ‘wow-I-must-have-that-new-iron-it-looks-amazing’ kind of purchase.

No. While I can get excited about other white goods (who doesn’t?) I find it hard to get excited about irons. It’s just that my other one, Mr Russell Hobbs, was cranky and had a knack of vomiting bile at the very moment I got to a crisply starched white collar. Naturally, this strained my relationship with Russell. Thankfully, he died not long after. In need of a new iron, and wishing to support a quality, sympathetic employer, I went to Amazon. It had many irons. Some looked particularly appealing, being sleeker than Russell, with more buttons. One even had a go-faster stripe. This I admired. I picked an ergonomic number by the name of Phillips. Phil was neither the cheapest, nor the most expensive, but his purple and white appearance felt more masculine than his pink, Bosch competitor. Phil duly arrived having been picked and packed efficiently by one of Amazon’s enthusiastic, fully engaged workforce. Excited, I tore off his packaging and we got straight to work. Things immediately went well. Phil was thirsty, gulping water and cunningly turning it into powerful bursts of steam. We breezed through a pair of chinos so I set Phil a stiffer challenge: the poplin shirt. He didn’t flinch. Or sweat. Unlike the consumptive Russell, who would awkwardly cough and splutter his way through a light linen number, before farting tepid brown water onto a double cuff, Phil got stuck in. Blitzing through a basket-load in less than a third of the time Russ used to take. I wasn’t just impressed. This was a revolution. Armed with an extra few hours that weekend thanks to Phil’s efficiency I had time to reflect on this key learning: the idea that, if we always do what we’ve always done, using the same old technology and approach, we’ll always get the same result. We won’t necessarily know there’s an easier, faster, superior way of doing the same thing. Why spend ten minutes ironing a shirt, when you can do it two? This, to me, highlights a core issue in business (I had to relate it to business at some point for fear of frightening the editor): there are new, better, easier, faster and often cheaper ways of doing things we’ve always done; and that if, as an SME, you don’t adapt, adopt, and embrace them, you get lost in a world of inefficiency and warm farts. Basically, you get stuck with Russ. Whether it’s Dropbox for sharing files, Salesforce for logging customer contact, Sage for accounting or, ahem, Hiring-Hub.com for recruiting, these companies all focus on one thing: making the lives of those that use them simpler. They all save the user time, effort and often money, and that alone pays dividends and results in cost and efficiency savings. If you own a business and you’re stuck with Russ, it’s time for proactive change, to seek out new ways of doing the things you’ve always done. Because if you don’t, you can bet your competitors will. And once they get hold of Phil, or a product like him, you risk getting left behind. Simon Swan is the co-founder of Hiring-Hub.com, a multi award-winning online recruitment marketplace that makes the lives of those responsible for recruitment easier. Image Source