What better way to measure and analyse the levels of sunshine inducing employee happiness in the world than the Global Workplace Happiness Index? The research took groups, including over 200,000 young professionals working across 57 different markets, as their object of study.

“The index is an indicator for employers, helping them realise where they need to emphasise aspects of work culture to attract or retain talent.” – Daniel Eckhert, Universum

Scandinavians are happy with their current jobs, but will look ahead

We often hear sunny snow-capped tales of happy societies in the northern lands, including surveys advocating better quality of life and higher economic productivity. So, it shouldn’t be surprising that the Nordic countries come top trumps for employee satisfaction with their current jobs.

This includes the countries of Denmark, Finland, Norway and Sweden, but Finland stands out as a somewhat strange exception. Employees don’t follow the modern trends of looking ahead to future job prospects, as at national levels, employees seem to stay with the same employer, thus there is no ‘current job’ but a lifelong occupation.

“In countries where young professionals are less happy, an important driver is development and learning opportunities, while in the happier countries, improved work-life balance is a top-driver”. – Daniel Eckhert, Universum

Latin American countries such as Chile, Colombia, Mexico, Panama and Peru also display impressive levels of job satisfaction among employees. However, they are more willing to look ahead and consider future job opportunities. They are more likely to change employer over the next couple of years.

The exception in this part of the world is Costa Rica, where, similarly to Finland, they seem a little more traditional when it comes to job loyalty. Workers are more likely to stay with the same employer for a considerable amount of time. 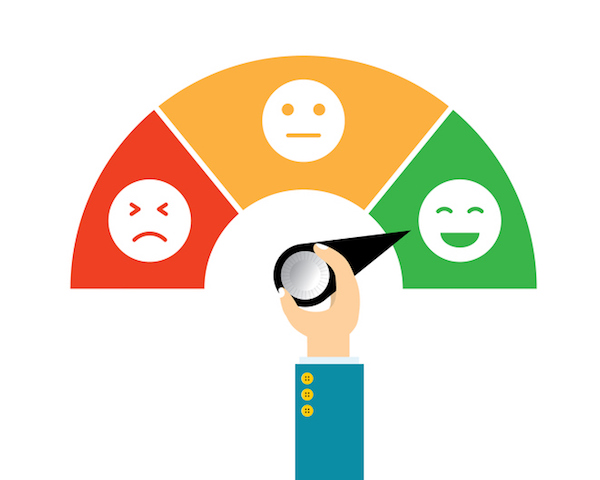 Algeria is a country where the survey has shown high levels of employee-related discontent. However, Algerians are among the workforces least likely to change employment over the next 2-4 years. This could be down to economic uncertainty, and the fear of not finding other employment.

A surprising country to be found in this section is Japan. The East-Asian economic superpower shows similarly high levels of employee discontent, especially in their current jobs. But like the Algerians, they will not easily leave their places of work.

In Japan, these factors could be down to culture rather than economics. Cultural laws, such as conceptions of honour still hold traction in society, especially when it comes to the world of work. This is manifested in the form of employee loyalty.

Usually, the logical trend goes, the higher a country’s GDP and general economic performance, the happier the workforce. But the study has shown that some of the world’s richest countries have the least happy employees. For example, Qatar, Kuwait and the UAE are countries with high GDP, but their workforces are lurking at the lower end of the Happiness Index.

Again, this could also be down to cultural, social, and to some extent, economic factors within these middle-eastern countries listed above. One example being migrant labour, especially among workers from India who often face poor working conditions, low pay, and incidents of racism.

Whilst this survey largely focuses on young professionals, it can’t be denied that the social stratifications in this region may impact those working in the professional economy too, especially those who are not native to the region. The lack of social egalitarianism no doubt impacts general employee satisfaction as a whole. 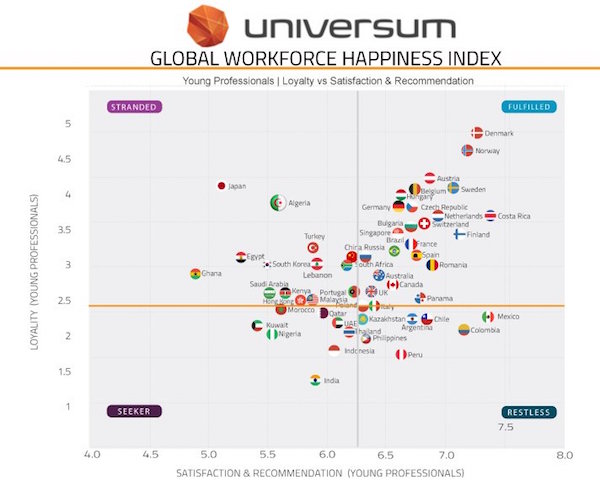 The research shows a clear pattern between female employee happiness in a country and the number of women participating in the labour economy. Generally, western European countries have a happier female employee index simply because there are more women working in that region.

This contrasts with parts of Asia, Africa and the Middle East, countries that are not faring so well when it comes to female happiness in the labour market.

India is getting professional about female enfranchisement

However, India is making great strides in facilitating greater female participation in their professional economic landscape. So it will be interesting to see if the general happiness index among female professionals rises in the years to come.

What the findings show is that whilst the problems concerning employee happiness, or lack of it, can be found in data, the answers to solving these issues lie in dealing with human emotions. This means that employers, senior staff and HR teams need to listen to staff, and understand their needs, ambitions and objectives.

This will create a working eco-system that allows for clear communication pathways between employees and employers. This will make it easy for the workforce to voice concerns, and feel able to move on if their job situation isn’t making them fulfilled or happy.

Creating a workplace based on clarity of communication will mean businesses can also rescue their brand from potentially damaging accusations and loss of brand reputation.

The argument “four”: Why reducing time at work could benefit businesses