Year on year, we observe a rising culture of presenteeism. This is despite?the Royal College of Psychiatrists?suggesting?presenteeism-related mental ill health?costs the UK economy ?15.1bn a year.?Legal & General believes it also reduces productivity by 12%.

But what is presenteeism and how can you prevent it??The term was originally used to describe employees coming into work while not physically or mentally well, instead of staying home and recuperating. It has since evolved to?include employees who are disengaged, Steve Thompson, managing director at Forward Role Recruitment, explained.

Disengaged employees, he said, are more likely to make mistakes. When you take into account the?phenomenon known as ?behavioural contagion?, morale can really take a nose-dive. It’s the concept of attitude filtering down the ranks and across the company.

It’s not hard to see why Thompson deems it the biggest threat to UK productivity. And disengaged employees aside, people lack significant focus when unwell. They also risk spreading illness to other teams. Like the game jenga, productivity comes toppling down.

In the end, whether it’s due to ill health or being disengaged, presenteeism can impact the quality and volume of work produced, with a further impact on overall business performance.

How presenteeism starts ? and steps to prevent it

Thomson explained?that presenteeism is most common in companies where long working hours are encouraged, and admin and operational demands are seen as more important than staff morale.?

There are a few reasons people might come into work when sick. There’s fear over job security, there could be a lack of pay when absent, they don’t want to be seen as?’lazy’ or there might simply just be a?heavy workload. But there are ways to address these issues ? Steve Thompson

He said: “Some 57% of employees would stay in their job longer if there was more effort put into looking after their wellbeing. The same amount believe their work would be of better quality if there were more health measures in place. So, it?s important for businesses to take action to tackle this growing problem.”

Thompson maintained that staff should be encouraged to take time off. While it looks good on paper to have perfect attendance from your employees, they should stay at home until they recover. A way around this would be for them to work form home until they feel up to par.

“If you have a hard-line or aggressive sickness policy, you may want to review it,” Thompson added. “If staff don?t get paid while ill or if there are incentives for 100% attendance, you may be encouraging people to come in when they are actually ill. Presenteeism is sure to reign supreme.

“When staff are simply disengaged, take the time to discover the route of the problem. Are your staff overworked, undervalued or time-poor? Or have they become bored with their tasks and crave a new challenge? Ask your staff to complete an anonymous satisfaction survey and find out areas you can improve on when it comes to employee engagement.”

Making employee wellbeing a priority is key. One way to renew passion in a role is to give employees incentives. Offer them ways, no matter how small, to regain their vigour and optimism. 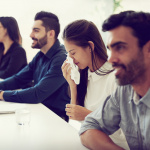 Productivity pummelled by presenteeism and leaveism, but companies are fighting the good fight

The CIPD has published its annual report on employee absence and wellbeing, revealing that “there are grounds for concern”. However, companies have employed various methods to combat presenteeism and boost staff health.