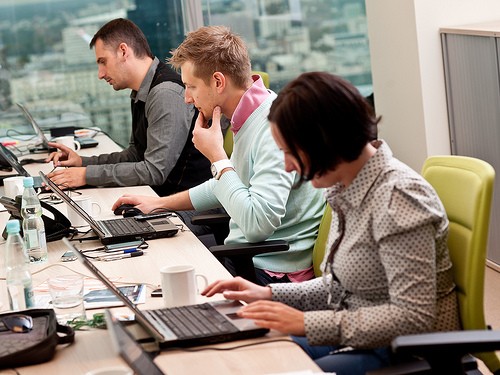 In previous research presenteeism has been associated with having both negative and positive effects on employees and businesses. But more often than not, it has been linked to exacerbating health problems, with more productivity loss than absenteeism.

In fact, the Centre for Mental Health calculated that presenteeism from mental ill health alone costs the UK economy ?15.1bn a year. But throwing a spanner into the works, a?key finding of the UEA study was that presenteeism not only stems from ill health and stress, but from raised motivation as well. The research analysed data from 61 previous studies involving more than 175,960 participants, including the “European Working Conditions Survey” which sampled employees from 34 countries. And one of the significant links to presenteeism it found was the severity of organisational policies used to monitor or reduce staff absence, such as strict trigger points for disciplinary action, job insecurity, limited paid sick leave, or few absence days allowed without a medical certificate. Job demands, such as workload, understaffing, overtime and time pressure, along with the difficulty of finding cover and personal financial difficulties, were found to be key reasons why people might not take a day off. Conflict between work and family, being exposed to harassment, abuse, and discrimination at work were also positively related to presenteeism.? Read more about preventing stress from taking over your life: Lead author Mariella Miraglia?said: “This study sheds light on the controversial act of presenteeism, uncovering both positive and negative underlying processes. It demonstrates that presenteeism is associated with work features and personal characteristics and not only dictated by medical conditions, in contrast to the main perspective of occupational medicine and epidemiology. “Working while ill can compound the effects of the initial illness and result in negative job attitudes and withdrawal from work. However, the possible negative consequences of being absent can prompt employees to show up ill or to return to work when not totally recovered. Organisations may want to carefully review attendance policies for features which could decrease absence at the cost of increased presenteeism.” However, those who had a supportive work environment, for example supportive colleagues and a good relationship with managers, felt they did not have to go to work when ill, and were both more satisfied with their jobs and healthier. Optimism was linked to presenteesim in that those with a positive outlook were more willing to carry on with their work while ill. “Because presenteeism is more predictable than absenteeism, it is easy to modify by management actions,” said Miraglia. “Workplace wellness and health programmes may be desirable to reduce stress and work-related illness. Furthermore, although increasing job resources, such as job control and colleague, supervisor, and organisational support, can be helpful in tackling presenteeism through their positive impact on health, our results suggest that controlling job demands represents a key line of defence against the behaviour. “Companies may benefit from well-designed jobs that limit the level of demands to which employees are exposed to every day, for example by reducing excessive workload, time pressure and overtime work, as well as making sure they have the resources they need.” Miraglia said further research was needed to understand when going to work while ill could be a “sustainable” and positive choice, for example in the case of a gradual recovery from long-term sickness, to improve self-esteem in the face of chronic illness or being an example of citizenship behaviour. “It could be a good thing for some people, a way of integrating back into work again,” she added. “But it would depend how much the individual and organisation wanted it and were prepared to be flexible, for example by modifying job descriptions or offering flexy time.”