Business founders, directors and executives can leverage unparalleled levels of corporate power if allowed to go unchecked. In both large and small businesses, this can be dangerous and result in serious managerial blunders that devastate brands.

Real world examples include the likes of Marissa Mayer, who took over Yahoo! in 2012 and effectively ran it into the ground. Yet, looking to more extreme examples, there can be no better showcase for the dangers of unchecked powers than Dr. Robert Ford in the hit HBO series Westworld.

The founder of a futuristic theme park designed around artificial intelligence (AI), Ford uses his influence and unhindered control to exact his own ideas without regard for the business he created.

The result? He has single-handedly destroyed the commercialisation of the company; costing not just livelihoods and income, but also lives. The actions of Ford serve as valuable lessons for the risks posed by unchecked power, but what exactly did this mean for the fictitious company of Delos Incorporated, and what could it mean for your brand if you were to experience rogue and uncontrollable management?

You can be surprised

Unchecked power means individuals have the ability to make decisions and carry out work without the approval, or indeed knowledge of other business members. Ford exhibits such behaviour multiple times throughout the series, from building personal machines to secretly proliferating conscious thought within the AI.

His authority means he becomes unbound from normal management processes and effectively operates as a free agent within his own business.

What this means for the Delos management team is that they are unable to predict or appropriately react to scenarios forced upon them by rogue employees. A good example of this is that after huge investment in a new storyline for the park, Ford immediately dismisses it upon presentation and puts an end to the project, wasting vast quantities of resources on his own whim.

Giving one person the power to effect such change without potential for pushback creates an environment of uncertainty for a brand; a trait no business wants to be associated with.

While TV series such as Westworld have let us grow accustomed to depictions of cyborg rebellion, we still relegate such fiction-based technology horrors to the impossible bin.

Power can lead to threats

Despite his countenance as a friendly and sometimes doddery old tinkerer, Ford was not above leveraging his influence within Westworld to assert his dominance. In a confrontation between himself and senior manager Theresa Cullen, his colleague expresses concerns as to Ford’s drastic changes to the park. He responds by using his mechanisms of control to show her how much power he actually wields. Finally, he threatens her, saying “don’t get in my way”.

The result of Ford’s superior levels of power means that it is simple for him to display his untouchability. Those like Ford, who are seemingly untouchable, are capable of using threats when their authority is challenged, because there is simply no way to contain said threat other than to appease them.

The business then faces a choice of pursuing actions that could lead to its collapse (or at least serious damage) or allow the individual to operate as they are and maintain the unstable status-quo. Neither option is satisfactory, but both are possibilities when power goes unchecked.

How can bosses ensure their companies don’t suffer the fate of Delos? It’s a question Smith answers on the next page.

The evolution of cyber threats – and the CEO disconnect 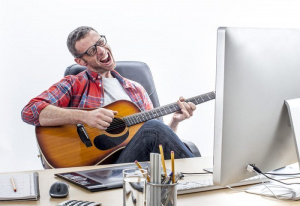 Do you have the happiest workers in the UK?