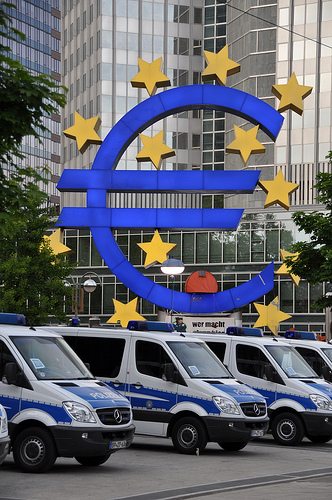 ‘Financial repression’ is the posh new term given to an age old activity that our politicians always use, but don?t like to talk about: Getting themselves out of the debt mountains they continually accumulate in their endless attempts at buying off the aspirations of their electorates.?

Financial repression can be achieved in many different ways. This time the trick was to make the central banks (Fed, ECB,BOE) buy vast quantities of government bonds. This artificially reduced the interest rate they have to pay – and hence interest rates in general – while letting inflation rip. It reduced the real value of those debts and the real cost of repaying them.?

For the Fed and the BOE the chosen method was Quantitative Easing. For the ECB it was lending a trillion euros at one per cent to the banks who then are encouraged to buy their governments? bonds.

While this charade is going on, it’s vital that politicians and central bankers keep up a steady stream of rhetoric about combining austerity measures with a drive for growth through efficiency, deflecting attention from their printing of vast quantities of paper money.

Inevitably some politicians, namely Angela Merkel and German Finance Minister Sch?uble and, until recently, Nicolas Sarkozy get carried away with their rhetoric and impose such savage conditions that the more vulnerable electorates start rebelling. At this point only one of two things can happen; and both are extremely inflationary:?

Either the country?s electorate refuses any more cuts and expects to devalue, or the lead central banker prints even more money to give the illusion that countries were bailed out.

Occasionally, some of the politicians and bankers give the financial repression game away. This happened recently when those apparent models of financial rectitude and discipline, Sch?uble and the Bundesbank, said respectively:?

“I condone impending German wage increases of 6.5 per cent”. They said it would help redress some of the imbalances in Europe. That Germany is likely to have inflation rates ?somewhat above the average within the European monetary union?. Unsurprisingly this immediately sparked the front page headline in Germany?s biggest selling tabloid, Bild: ?Inflation Alarm! How quickly will our money be eaten up??

Meanwhile, in a little noticed article in this week?s Financial Times by Philippe Aghion, a key advisor to France?s Sarkozy replacement, it was written that inflation rates in the northern half of the Eurozone must run at higher rates than in the southern half in order to restore competiveness to its distressed southern neighbours.

Pathetically, the rhetoric goes on. The latest empty soundbite comes from that old PR hand, our Prime Minister. Cameron said the Eurozone now ?either has to make up or it is looking at a potential break-up?. Or, to translate, ?I know just about every bank in southern Europe is bust again as well as a good many in the north so don?t blame me for turning on the printing presses and bringing on long term stagflation.?

As the American commentator John Mauldin puts it, ?This week the German Bundesbank waved the white flag. For good or ill, Europe has embarked on a program that will require multiple trillions of euros of freshly minted money in order to maintain the Eurozone. This is a Ponzischeme that makes Madoff look like a small-time hustler.?

What can businesspeople do to prepare for long term stagflation? I can only repeat what I said in a City Grump Article nearly two years back: In a no-growth environment there will be companies, such as those involved in life-changing technologies, that will do well despite the difficulties of coping with inflation?s challenges. If you run a rather more prosaic business, then I can only suggest you re-double your efforts to sell it before the buyer cottons on to that stagflation is here to stay.