First, let’s cast our minds back to November last year.

Lord David Young, a previous Cabinet minister under Thatcher and a former executive chairman of Cable and Wireless, was hired by PM David Cameron to conduct a “brutally honest” review of regulations, and look at how the government could encourage more people to start up companies. He replaced Lord Sugar as enterprise czar.

But, just a few weeks later, Lord Young made the politically foolish gaffe that cost him his job: “For the vast majority of people in the country today, they have never had it so good ever since this recession – this so-called recession – started, because anybody, most people with a mortgage who were paying a lot of money each month, suddenly started paying very little each month,” announced Lord Young. “That could make three, four, five, six hundred pounds a month difference, free of tax. That is why the retail sales have kept very good all the way through.”

His comments provoked fury and his subsequent resignation.

Nevertheless, Lord Young, 79, continues to champion the country’s SMEs (albeit on a much, much smaller scale). He founded private equity house Young Associates in 1996 and continues to invest in technology startups. One company is his portfolio is the cloud accounting software developer KashFlow.

Kashflow founder Duane Jackson says it’s an “honour and a privilege” to work with Lord Young: “His investment of time, money and invaluable advice has put us firmly in place as leaders in the market.”

KashFlow has cornered 70 per cent of the online accounting software market and pulls in sales of more than £1m.

Rumour has it that Lord Young has invested around £4m in Kashflow in total and owns 40 per cent, with Jackson owning the remaining 60 per cent.

Jackson, who grew up in a children’s home, first connected with Lord Young through the Princes’ Trust and London Youth Support Trust, and says the former enterprise czar has helped him grow KashFlow from “just an idea into a useful product”.

Lord Young is strangely secretive about the rest of his investments. There’s no website to speak of for London-based Young Associates and when we called the office and asked about the other companies in Lord Young’s portfolio, we were told: “that information isn’t in the public domain”. (We know, that’s why we’re asking). Very odd. 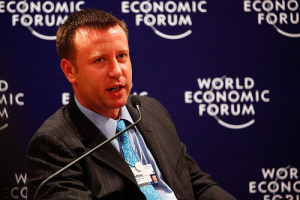 The way to China: Raising funds