Drones are the latest craze, with tech waiters and search-and-rescue lifeguards being more recent inventions. But what has been hailed one of the most important drone creations of our time is the quadcopter – made popular by Amazon CEO Jeff Bezos, looking at ways to have a fleet of them deliver orders straight to your doorstep.

Like a high-tech RC helicopter, quadcopters are getting people increasingly excited in robotics, moving visions for them beyond military purposes. This is especially so in the US, where research done by the Association for Unmanned Vehicle Systems International claimed the financial impact caused by unmanned aerial systems to the US national airspace system was over $13.6bn from 2015 to 2018.

With the UK’s interest in working alongside Bezos to make his flying drone fleet a reality, it’s safe to say the nation found that quadcopters would add similar potential to Britain’s economy.

But let’s be frank, it’s everyone’s dream to own some form of drone variant. So why not make it your next corporate gift?

When it comes to food and alcohol there’s much to think about in terms of client tastes. But who wouldn’t want a quadcopter? And as always, if you’re going to buy such a pricey item you may as well go for one of the best.

“Larger and, frankly, more menacing-looking than the company’s chunky little Phantom 3 drones, the Inspire 1 was made for professionals, but is as ready to fly and easy to pilot as the Phantom models. For starters, while the cameras may perform the same, the Phantom 3’s can’t be easily repaired or upgraded.”

And when it comes to the Inspire 1, featuring the Zenmuse X5 camera and gimbal system, you gain yourself a handy retractable arm system that makes for easier landing. 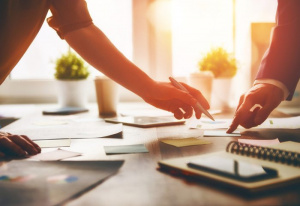 Assume new business is in the bag at your peril