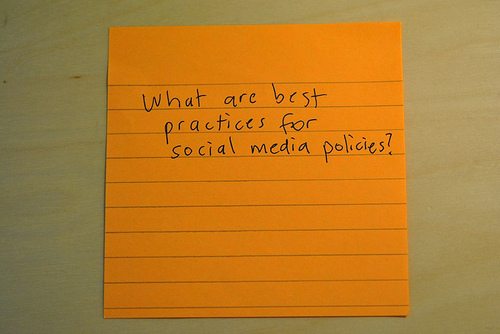 As social media offers employees instant, often irreversible, access to a worldwide public audience, this raises the pressing question: are employers and employees aware of the boundaries to be drawn between work and private lives?

In a much publicised case Mr Crisp sued his employer Apple Retail following his dismissal for posting critical remarks about Apple products on Facebook. He lost. Key to this decision was the fact that Apple had a clear social media policy that was communicated on induction and that Mr Crisp had further training on the policy. The policy prohibited this behaviour. Mr Crisp was therefore aware of the policy and potential implications of breaching it. In another case JD Weatherspoon dismissed an employee for making inappropriate comments about their customers on her Facebook account. The company social media policy expressly dealt with issues around inappropriate blogging on social networks and explicitly stated that it was an offence to use social media in the workplace and to make comments about customers. The dismissal was held to be fair because the policy was clear and communicated. However, it is not all one way. In a recent case a Christian employee made comments about not approving of gay marriage on Facebook and was dismissed for misconduct. It was held that the dismissal was unfair as the employee was entitled to express his views and he was not using his Facebook page for work related purposes so the business was not brought into disrepute in any way. It was acknowledged that particular offence had been caused to another employee with different views, but this was held to be a necessary price paid for freedom of speech. This case was a stark contrast to the Apple case above, which suggested that an employee could have no expectation of privacy in his Facebook page. One business that handled a potential social networking disaster particularly well was pizza chain Domino?s. It took to Twitter to apologise after workers posted videos on YouTube of them abusing food. The video apology tackled the issue quickly and effectively. A social media policy will have to deal with the boundary lines between an employee?s actions in their own ?private? time as well as on work time. It must strike a balance between the employee?s freedoms and right to a private life and the interests of their employer in particular in protecting its business reputation and other staff.  Such a policy should at the very least:  Given the evolving nature of social media both employers and employees need to be on their guard, ensuring familiarity with policies and procedures and the potential consequences of breaches. For businesses, if you do not have a social media policy now is the time to introduce one. If you already have a policy it may need reviewing and updating and/or it may be time to consider individual roles and introducing appropriate contractual provisions to provide you with sufficient protection. Louise Brenlund is an Associate Solicitor at law firm Brachers LLP. Image source