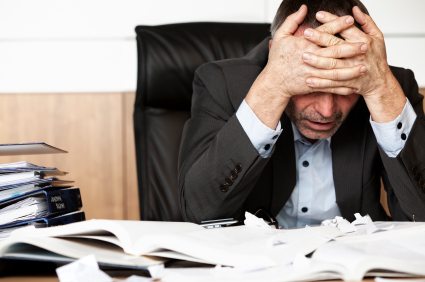 I have had the privilege to spend over 7,000 hours in one-to-one coaching conversations with hundreds of leaders across different industries, cultures, and across Europe for over a decade now. From the witness chair of observing leadership I have realised that much of the high pressure at work today could be avoided by leaders and managers taking time for self reflection.

There is a combination of reasons for stress in the workplace. Each of these reasons is stress producing in its own right. In this article, I will focus on the unnecessary stress produced by managers and leaders to which they appear to be oblivious. I have found that most leaders are not aware of, or dismiss the impact they have on the effectiveness of their teams.  It is my intention here to bring to light what I have concluded to be the most common factors which, however logical or obvious, are somehow sidelined by leaders into a hidden corner of their mind. Much of the reflection time, which has effectively reduced the amount of pressure on my clients? side of the business, has been spent in reflecting and bringing to their consciousness their impact over priorities, communication, and the unnecessary frustration, hurt, resentment and so on triggered by this lack of awareness. By taking responsibility over the type of impact they want to have, leaders restore or create a healthy and efficient atmosphere where their team is more likely to succeed, possibly expanding this impact into the whole of the organisation. Some prime examples of how bosses can unconsciously create stress include:

This is when senior leaders involve their people by asking them to do something very late in the process. That new deadline impacts their other work or private life because of the late notice. The consequence is not only a lack of planning but also the extra stress caused by feeling that ?I am not controlling the situation.?

In certain industries, leaders repeatedly change priorities (so called ?flavour of the day?). Little by little, everything becomes a priority. This increasing number of targets -theoretically temporary – has a way of slowly becoming permanent, making the pressure eventually unsustainable. This contributes to another ground for stress, namely excessive workload slowly trickling in. This may be aggravated by hiring freezes. Being caught in the day to day and minute to minute rush, it’s easy for leaders to forget to take time to reflect, therefore getting more and more lost in a vicious circle. When these factors are at play there is a tendency to say ?yes? to everything, whether for personal ambition, out of habit, for fear of losing face or wanting to live up to expectations.

3. Inefficient feedback and lack of recognition

Leaders focus more on mistakes or shortcomings, while overlooking achievements or taking them for granted.

4. No empathy or allowance for a different way of ?doing?

Leaders believe everybody thinks (or ought to think) the same way as them, and therefore want everything presented the usual way. This does not allow a richness of variety but instead create clones and makes it impossible to bring out the best in people. This also links to the extra pressure of inefficient communication, when leaders assume people know what they mean and therefore communicate vaguely.

Leaders have difficulty in taking decisions so often ask for maximum information, or additional information before making a decision (or not). This results in additional work. Whilst in the executive meetings time is taken to look at the business trajectory, there is often a lack of time taken for self-reflection, for looking at where leaders could take pressure off – both in the usual business sense and in a personal sense. The higher the level of leadership, the less leaders want to hear about problems. We find there is a leadership/management layer that inevitably has to solve them but does not always have the support of their boss to do so. When demands combine with lack of support, the pressure is high.  The manager whose job it is to solve these challenges needs to ask for support but rarely do they see this is their right, and afraid of being found lacking or even incompetent, they continue to work in unsustainable pressure.  It’s crucial that the top layer understand that people need their support in order to perform. A lack of this understanding, together with the unawareness of the lower layer that they can and must ask for support in order to deliver, is one of the greatest forms of extra pressure I have found. The way for leaders to tackle this problem starts with self-reflection. Leaders who are willing to grow as people and develop character immediately take their leadership to another level.  For a leader to grow in awareness, he/she first needs to want to see, then look for and listen to feedback by the few people around who will dare to give it. Nowadays, many businesses have found that the most efficient way is by embarking on a leadership development program or/and hiring an external coach. Pilar Godino is the author of ‘The Business Alchemist’, which comes out in May and is published by Hay House Publishers.