Skip to content
Sales & Marketing
Share via
But it’s far from the only company to have noticed the link between content strategy and real-time marketing. When the curtain goes up on the Emmy Awards, HBO is ready. The cable network is always nominated for a plethora of awards. Naturally, there?s no way of knowing who, or what programming, will win which categories. At the same time, there are plenty of knowns: the shows, actors, directors and talent who were nominated in each category. So, the social media team, led by VP of digital and social media Sabrina Caluori, sprang into action weeks before the actual event. They created content for every possible award outcome. But first, they informed internal stakeholders (management, legal, communications) about their overall content strategy and what the team planned to do and react to. From this, guidelines and rules of engagement were developed around the content, much of which was locked and loaded in advance of the event. ?We know we need freedom to develop content on the fly, but we need to know the guardrails [and] if anything we did needed to be escalated,? she said. ?There are built-in parameters for the campaign.? HBO aced the evening (mostly on Twitter) with responses to the awards, winners, and show itself that were immediate, timely, on-message and on-brand. I?ve identified six business use cases for real-time marketing (RTM) and outlined best practices based on our research. But if successful RTM boils down to just one thing, it?s having a clear, mature, fully developed content strategy in place before leveraging the ?right now?. RTM initiatives fall into a quadrant of initiatives that fall on a sliding scale between reactive/proactive and planned/unplanned. Being proactive and planning is ideally where you want to be when marketing in real-time, as illustrated in the above HBO example (there are many other such case examples in the report). 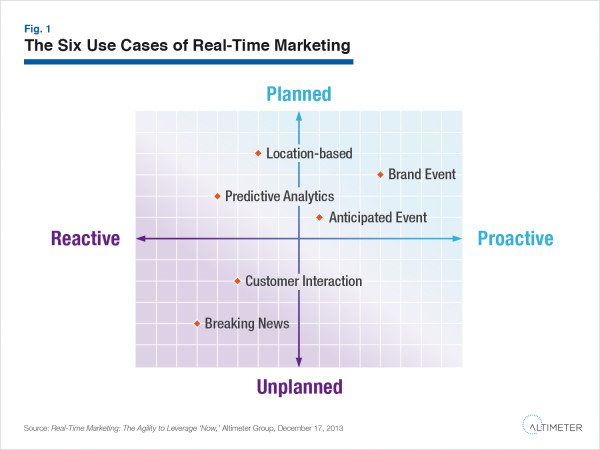 Yet even reactive RTM ? responding, for example, to breaking (and often negative) news such as an oil spill in the Gulf of Mexico, a volcanic ash cloud wreaking havoc with flight schedules, a bombing at the Boston Marathon, or (stop me if you?ve heard this one) the lights going out at the Super Bowl, are (or should be) predicated on content strategy. If Oreos, for example, hadn?t nailed down its voice, POV, brand values, tone, imagery, graphics, font, target audience, channel strategy, and all those other brand book and style guide elements, not to mention secured approvals (or the ability to get them ? fast), it never would have hit it out of the park (to mix sport metaphors) at the Big Game. At an executional level, content strategy also aids in the creation of the more anticipatory locked and loaded content assets. These facilitate the appearance of real time to customers, but can be created, approved and queued for deployment well in advance. In fact, real time can be integrated entirely with ongoing content marketing initiatives through modular, repurposable, or even evergreen content hubs. What about times (and real-time is all about time) that you can?t run it up the flagpoles of legal, corporate communications, PR, and other departments? RTM is, after all, about empowered and highly trained staff getting messages out at lightning speed. The most mature brands aren?t worrying about these approvals. They?ve established internal playbooks for real-time. I like the three questions Symantec employees must ask before pushing ?send? on RTM content: ? Am I creating unneeded risk to the brand? ? Could this impact the company or myself negatively? ? Would I want my grandmother to read this? Note these questions are short and sweet. They don?t waste precious time ? but they cover the bases. Nothing, however, beats having content close at hand and ready to deploy in real-time environments. Otherwise, there?s a real risk in missing opportunities. (Click on image to see a larger version.) 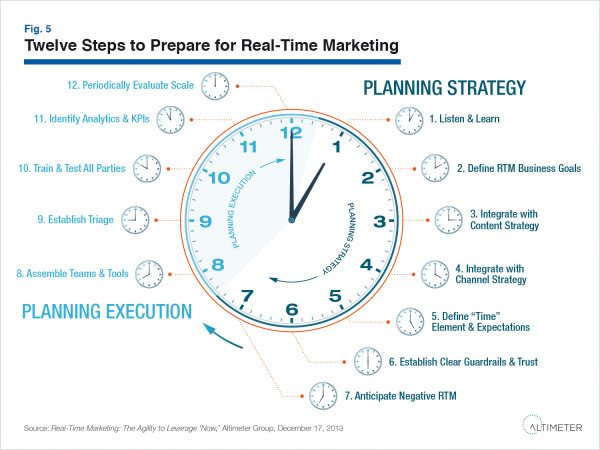 Recently, I was speaking with a marketer from a national restaurant chain that?s been widely lauded for its RTM efforts. She, however, was kicking herself. Her responsibilities are for a line of cool, refreshing drinks. ?This past September was the warmest on record. We were all ready to go with content around another food line. We had nothing for my segment,? she lamented. ?It was a real missed opportunity.? Whether it?s the weather, or the news cycle, your own brand events or customer interaction, you can?t engage in RTM without content. Customers expect brands to be ?always on,? present and relevant. Just one more argument for content strategy. Rebecca Lieb is the author of Content: The Atomic Particle of Marketing ? The definitive guide to content marketing strategy. It is out now, published by Kogan Page, priced ?19.99