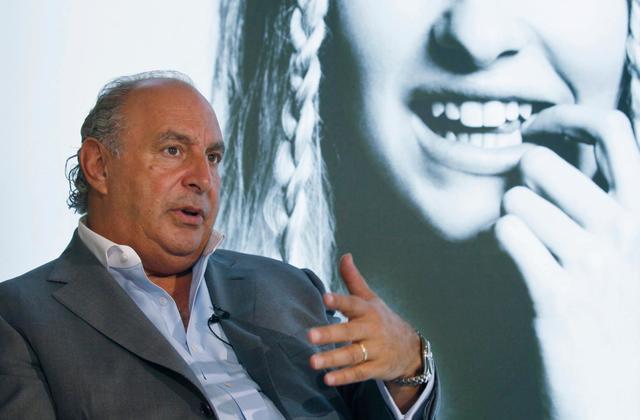 Share via
Like him or loathe him, retail magnate (Sir) Philip Green was once seen as the epitome of UK high-street success. He had the money-making fashion brands, the celebrity endorsements, and even the mega-yacht to boot. During the halcyon years of the early 2000s, Green was worth as much as £4.9bn. It seemed that all that glittered was indeed gold for Green and co, and soon he earned himself the title ‘king of the high-street.’

Green owns a vast array of high-street brands, from Wallis, Evans, Burton and Miss Selfridge, to Dorothy Perkins and his flagship brand(s) Topshop and Topman all of which make up the Arcadia Group, where Green is the Chairman. But then something happened. Well, two major things to be precise. The first, he did terminal damage to the group’s CSR record by the way he handled the British Home Stores event and its subsequent administration in the years 2015-2016. The second, he missed out on the e-commerce revolution, (that started in 2006 and now dominates consumer fashion culture in 2019), which called into question if he was ever a great retailer in the first place.

The BHS back story…

Green owned BHS for fifteen years before he sold the failing company for £1 to entrepreneur and ‘serial bankrupt’, Dominic Chappell, a man that’s been hit with?fraud charges, money laundering accusations and whose career has been marked by financial failures. Was selling the company to such a dubious and unsuitable character a decision a seasoned retail entrepreneur would have made in innocent ignorance

Green’s decision to rid himself of a company that employed 11,000 UK workers to someone with a less than perfect track-record in keeping businesses alive showcased his lack of care for its future. It showed that he wanted the dying patient off his hands and at any cost. He also left BHS with a £571m black hole where its pension fund should have been. When the brand collapsed a year after its fated sale, it emerged that not only had Green failed to fund the company’s pension scheme when he owned it, but he and his investors had been paid over half a billion pounds in dividends during this time.

Flogging a dying business and cashing in

Then came a parliamentary investigation into the collapse, where Green said his decision to sell the company to Chappell was ‘the worst mistake of his life,’ and he subsequently agreed to pay £363m into the BHS pension fund.

In 2018, politician Peter Hain used parliamentary privilege to bring the sexual assault and general misconduct claims being made against Green to the fore.

For an entrepreneur with decades of business experience, imagining that Green was unsure whether his decision to sell an underfinanced company cheap to a businessman with a poor financial record wouldn’t have negative consequences is hard to believe

It seemed that the BHS fiasco opened the floodgates for en-mass critiques and accusations about Green’s less than perfect business personality. In 2018, politician Peter Hain used parliamentary privilege to bring the sexual assault and general misconduct claims being made against Green to the fore. Not only was Green hit with multiple accusations of sexual harassment by female staff and company executives in their hundreds, but there was also claims of psychological bullying, and engaging with claimants in lengthy court proceedings in the hope they would lose inclination, as well as the financial ability to carry on the fight.

2. ‘Missing the boat’ on e-commerce

Philip Green was once seen as an innovative retail entrepreneur with his multitude of brands on the high-street, but he stopped being so by ignoring the advent of online shopping. [article id=”130536″ title=”Primark defies high-street decline”] Perhaps he was distracted by the BHS investigation and the sexual assault claims, but whatever the real reasons, we can say with certainty that 2015-2018 were the years in which the once disruptive retail tycoon was disrupted by more agile online retail brands that served their core customers better.

An unwillingness to innovate

It was during this time that the likes of Boohoo, with its fast-fashion trends, race-to-the-bottom affordability and rapid deliveries that ensured its subsequent stock-market listing in 2014. However, Green isn’t able to totally blame the e-commerce revolution for the declining appeal of his brands, as another high-street legend, Primark actually experienced a 25% profits surge this year.

Unappealing and ‘out of touch’ brands

So, why is Green’s Arcadia Group failing where online brands, and a few high-street ones, are succeding” Well, in a consumer market driven by cheapness and convenience or by high-quality in-store experiences, the Arcadia Group’s offerings fail to cover either base particularly well.

A lack of focus on his strongest business

There’s also the question over whether Green is that much of a retailer, or whether his talents only lie in the forging of a deal. This lack of retail acumen is evident in the question of why he’s hung on to his less his well-performing and culturally out of touch brands, such as Miss Selfridge, when Topshop is his flagship brand with the most potential but requires a re-vamp to appeal to younger customers.

An Arcadia reshuffle come too late

So, faced with a declining high-street appeal, and with many of his contemporaries going to the wall, the Arcadia Group bought itself some time this summer by agreeing to close 23 of its 566 stores in the UK and Ireland and reduce rents across 194. While this may temporarily stem the Arcadia bleed, the next year or so could signal the final demise of this once-proud and now out-dated high-street king.