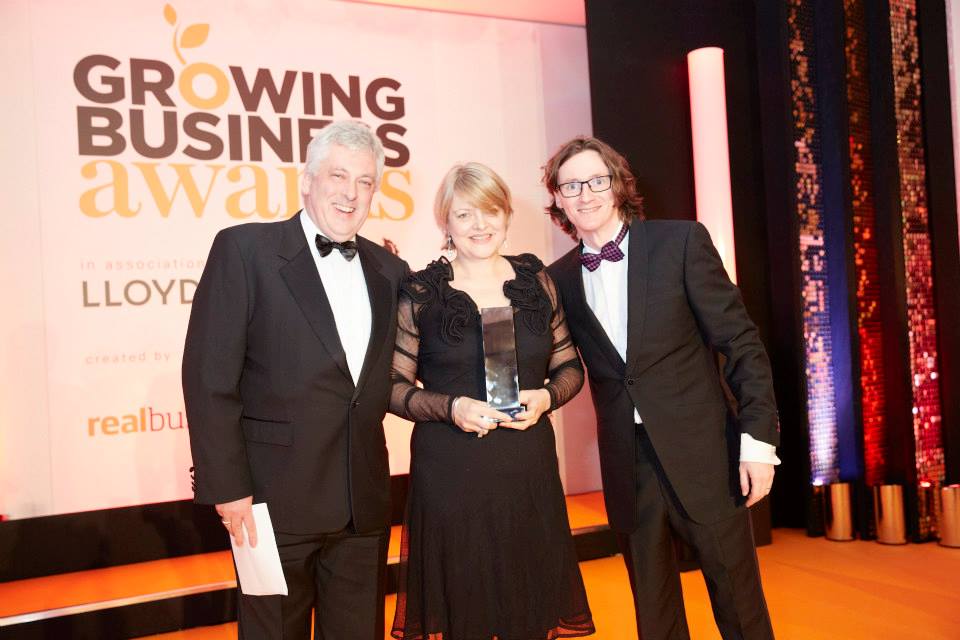 A report on British pre-schoolers recently found that one-fifth regularly use computers and tablets, while 25 per cent own their own devices – compared to four per cent in 2012.

Good news for Nosy Crow then, the children’s book publisher, which opened in 2011 to deliver a unique blend of printed books, ebooks and apps for youngsters aged between 0 to 14.

The business was named Young Company of the Year at the Growing Business Awards, a category sponsored by Citroën. As part of winning the award, MD Kate Wilson and the company secured use of a Citroën C4 Cactus for a year.

Wilson told Real Business exactly what it meant, saying: “It was a great privilege and honour – it’s fantastic for us. It was quite unexpected, especially going up against much bigger companies.

“We’ve also won publishing industry awards, and it’s great to be recognised by peers, but to have the dinosaur industry of publishing recognised against modern sectors was extremely interesting for me, and I feel it’s a win for what’s a beleaguered industry.”

While Nosy Crow is independent, it counts John Lewis among longstanding partners in its short lifespan, and the partnership was forged in a rather dynamic way. “After seeing their Christmas advertisement in 2012 we made a book about it over a weekend, pitched it and got the gig – securing it for the following two years,” Wilson confessed.

In case you’re unaware, John Lewis’ 2014 ad for the festive season – entitled Monty’s Christmas – caused quite a buzz on social media when it was released, racking up seven million views in one day.

The British retailer has launched a significant merchandise marketing campaign on the back of the ad, with purses, clothing and – in the case of Nosy Crow – books.

Unicef is also a partner, and the deal was clinched after the publisher’s work with John Lewis, with the children’s charity saying: “We know from John Lewis that you can be responsive and fast,” Wilson recalls. “We’ve also secured a deal with the National Trust, who were interested in the openness of us.”

It’s unquestionably a smart move to combine the worlds of print and digital, backed up by reviews from mothers and fathers, promotions from Apple, and feedback from the press which dubbed it “the Steven Spielberg of apps.”

Wilson hasn’t always had it easy though, and Nosy Crow was created after she was fired from her previous post as CEO. Speaking of the phoenix-like resurrection from the ashes, Wilson loves running her business. “There are challenges but I still think it’s worked out really well for me. I like not having to ventriloquise a corporate voice, we can offer authors a better and more tailored approach, and fast. Being small-scale and independent, I don’t need to ask for permission, I can just get on with it.”

But where did the vision for uniting platforms come from? It only seems as though some publishers jumped into the app arena over the past year, while Nosy Crow started almost four years ago.

“I have a background in print publishing as a corporate refugee of big companies, so I saw the opportunity to have print and digital much more connected and blend them – big publishers usually have them separated as digital lives on one floor and print was the legacy on another.

“I looked at what kids were doing in 2011 and I was thinking we would create for them ebooks with audio where the words light up.”

Of course, there has been criticism of children using mobiles for a number of reasons. Some accuse parents of simply expecting their smartphone or tablet to act as a babysitter, but the other negative link is the costs involved when kids go maverick and start making in-app purchases without adult consent.

At the start of the year, Apple was forced to pay $32.5 million to parents whose children had made unauthorised downloads and transactions on the App Store.

“We don’t know what the effect of screen use on children is. Some evidence says screen use shouldn’t happen for kids until the age of two, so we wouldn’t go younger then that. Otherwise, it’s a question of balance.

“As a parent of teens, I remember carrying a huge bag full of kilos of books when we went to a park, cafe or on holiday. It would have been brilliant to take all books on one device, ones that could be as exciting and thrilling as playing games. We’re trying to blur the edges of reading and play to encourage more time on screen reading. We only want to produce the best.

“We have done in-app purchases before. One app is completely free with no costs, and one app has a clear in-app purchase structure with a cap of $9.99. It’s admittedly a risky area, but we need to monetise creativity to remain a sustainable business. However, we’re anxious we should be appropriate and we’ve had a good response – our other 12 apps are all all one-off payments.”

Despite most brands’ apps sporting their branding and logos, a lot of the legwork – if not all of it – is done by a third party app developer, but not for Nosy Crow.

“We do all of our development in house – there’s no outsourcing and we have a small team of former video games industry people with the expertise to make compelling titles, with animation and coding.

“On the publishing side, we are bringing the knowledge of how children read and the understanding of a story. Sometimes we’re able to produce books on the back of an app and vice versa because of content – it’s a blurred line.”

The company was ranked as the 16th biggest children’s publisher in the UK at the end of 2013, but that could change as 2015 approaches when the company is set to have 20 members of staff, up from four in the beginning.

“Christmas is quite a peak time for the year. You don’t know what competitors will do, but our revenue was £4m this year and we’ve budgeted for £5m next year. We think about what’s achievable for us and a 20 to 25 per cent revenue jump isn’t bad,” Wilson revealed.

The revenue growth will be supported as the company has a goal of publishing 80 books, which is up from 62 this year. The core audience the company looks to reach is three to seven, but Wilson explained that certain titles do better for others, with all books boasting individual strengths.

The London-based company hasn’t opened offices overseas yet, although it’s moved into its third office in as many years – indicating the growth. However, the rights to the books are sold in almost 30 languages, including French and Mandarin.

Noting the subtle and quirky differences with some locations, Wilson said: “The US market is the biggest non-UK market – it’s very significant. An odd example of differences is with one of our Christmas books, which had a robin on the cover, but in the US they told us the robin represented spring and they wanted a red cardinal added to the cover instead – their bird of Christmas.

“We try to think about specific market needs and not all books will appear everywhere because different markets have different content preferences – you can’t sell Three Little Pigs in Middle East.”

Closing on the topic of being a successful businesswoman with guidance for fellow female entrepreneurs, Wilson’s choice of mentor is a unique one. “I think women should use the advantage of being a woman, being able to be honest and vulnerable. More and more businesses want a direct connection with consumers, and being transparent and authentic is important as man or woman, but perhaps slightly easier for women. I look to Dory from Finding Nemo – just keep swimming.”

Concerned with issues surrounding gender diversity in business? Don’t miss Real Business’s First Women programme: Drawing on ten years of the First Women movement and the phenomenal network of pioneering women the Awards has created, this programme features The First Women Awards and The First Women Summit – designed to educate, mentor and inspire women in all levels of business. Join the conversation with #RBfirstwomen