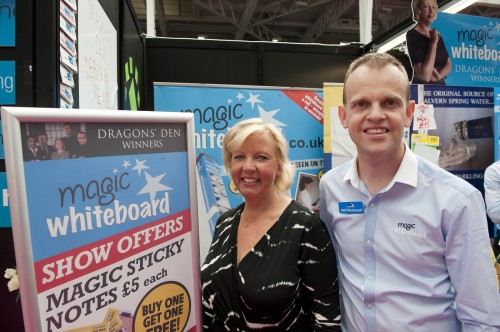 Share via
All of the dragons were impressed by the “reusable and erasable alternative to a flip chart” – that’s how Westwood described his product – bar Peter Jones. “It’s ridiculous,” he spat during the show. “Why would I ever use this?” But their appearance on the show wasn’t in vain as the Westwood’s accepted a £100,000 offer from Theo Paphitis and Deborah Meaden in return for a 40 per cent stake. In the period since, the company has been a growth success story. Its current turnover is £1m a year, and in 2014 the Westwood’s bought the Dragons’ Den investors out for a combined £800,000. But one of the most crucial lessons the two founders learned was that it’s easy to waste money in marketing. To help shine a light on the issue, Westwood unveiled five things bosses should be wary of – advice, he said, that he would also be taking on board the second time around.

“I’ve wasted hundreds of thousands of pounds since we started in 2006,” Neil Westwood said. “The problem is, everyone’s a guru and if you haven’t come from a marketing background, you believe them at first. We were spending a fortune on paid search on Google but were paying as much as a pound for a click through to our website and only one in every 100 converted. We’d end up paying £100 to make a profit of £15, which isn’t very good business sense.” Digital display advertising, he claimed, was also a pricy expense that didn’t always deliver. In fact, Westwood suggested the banner ads saw no life in sales – even sponsoring the Worcester rugby pitch had no effect. This all leads him to the conclusion that bosses need to beware of paid-for search.

One of the most important marketing tips any business leader should take into account is that a natural approach will be more beneficial to your company. Westwood suggested that rather than paying for paid listings, firms should focus on search engine optimisation (SEO). Read more about SEO: He said: “SEO was another area we wasted a lot of money in. We’d use agencies who knew how to best set up a website so it’s Google friendly. That’s great, but such agencies always wanted a monthly retainer for doing little. We took it back and learned how to mark up each page with meta tags, where you put in keywords that describe what the page is about. “If these match up with what people are searching for, such as ‘magic whiteboard’ or ‘portable whiteboard’, the results can be great. They have been for us. It’s the best use of our budget by far because nobody knows our business better than us.” Read on to find out more about wowing the crowd.