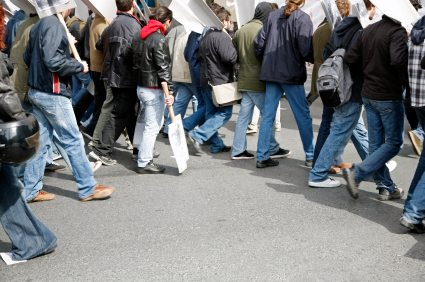 I’m afraid no amount of not working is going to turn public opinion to the unions’ way of thinking, especially given the fact that they have for a long time, and will for the foreseeable future, continue to enjoy a better deal than all those left inconvenienced by their actions.

At least the fuel tanker drivers saw sense on Friday and called off their strike. As the Director General of the Institute of Directors said, the hard work of the businesses would be undermined by a dispute that they had nothing to do with.

But that is exactly what the PCS, Unite and lecturers unions attempted to do last week.

With their actions they were poking at a wasp’s nest and expecting the inhabitants not to become angry and sting them for their trouble.

As I tried to explain to the Marxist union fellow on BBC Radio 5 Live on the morning of the strike, annoying people by going on strike to point out how much better off than them you are will not help your argument.

I guess I should really be commending the unions and the strikers for doing us a service by promoting just how good current state pensions are – in some cases involving a 20 per cent (of annual salary) government contribution!

I don’t think that before this recent bout of industrial action people were really aware of the facts.

And as for complaining about the retirement age rising a few years to 67 or 68 – please! The simple truth of all this is that we don’t have enough cash to be so generous with tax money. We should have stopped it years ago, but that is no reason not to do it now. In fact, the situation is more desperate.

Strikes never solved anything – and in this case it seems they only strengthen the arguments for pension reform.

After listening to the union diatribe about how everything is the fault of the bosses and corporations who are keeping all the money for themselves, and using politicians to do their bidding, I actually feel a bit sorry for those who were duped, or feel they had no choice, to have joined last week’s picket lines.