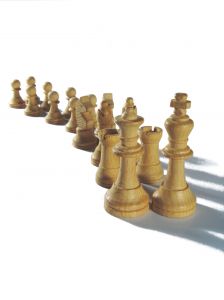 I?m writing this just before the election, but I know ? from my experience of working with the Conservative Party in 2005 ? that the outcome will be determined by a small but very powerful minority.

Five years ago, Lord Saatchi organised a competition for creative agencies and individuals to create a Conservative Party campaign logo. Several thousand entries streamed in from some of the most talented people in the industry. My colleague?s winning poster, The Blair Which Project?, made the headlines in the papers but was promptly forgotten when Tony Blair succeeded in being re-elected over Michael Howard. During the campaign, we met with Lynton Crosby, who was brought in to mastermind the Conservative effort. He showed me what really matters in a general election campaign and I remain both amazed and shocked to this day by how few people actually count. The ?swing voters? from the constituency of Houghton and Washington East (64.3 per cent Labour) and Richmond (59.1 per cent Conservative) don?t count. It wouldn?t matter who stood ? even a Tory with a duck house would be elected in Richmond. The majority of seats (around 380) are safe ? they will almost never change hands. Then there are 40-odd seats that are likely to change to whoever gains power, the highly marginal who will almost certainly elect a Tory this time round. There are roughly 80 seats that actually matter ? the ones that need to be won to form a majority. Within these constituencies, applying the national average, just 61 per cent of people will vote. Around 3m people will determine the outcome of the election. But even this number is reduced when you consider that the vast majority is fixed in its voting habits, so the only people who really count are the swing voters in those constituencies that are only possibly going to switch. We?re talking a very small number of people, less than a million, who really hold the power. For many businesses, similar calculations exist. I?ve written before about how often Pareto?s 80:20 principle applies ? perhaps just 20 per cent of customers truly matter. I?ll go further and suggest that, for many firms, only 20 per cent of potential new business opportunities will make the difference between a record year and a dismal one. Further still, the decision-makers that will cause you to succeed or fail can likely be counted on one hand. As with politicians, the success of many businesses depends on influencing a handful of significant people ? the vital minority. So why do politicians spend so much time appearing to be concerned with the majority opinion? And why should you continue to engage with a wider audience than you truly need to? Politicians may plod on with their pretence that we all matter, through national advertising, high-profile interviews and so on, but while they appear to be communicating with the majority, they are, in fact, addressing that vital minority. Swing voters in the key marginals are researched every day, not realising that they are so significant. They no doubt imagine everyone else is also being asked their opinion by pollsters seven times a week.? You, too, should be careful to target your key audience ? the real decision-makers. But don?t forget that, while specific messages to key individuals are powerful, they?re amplified when seen to be communicated more widely. If you?re looking to influence Mrs X, and target her directly, then make sure your website is reinforcing your message when she visits. All your communications should be considered through the lens of your vital minority. Don?t try to influence everyone ? everyone doesn?t matter. Image source