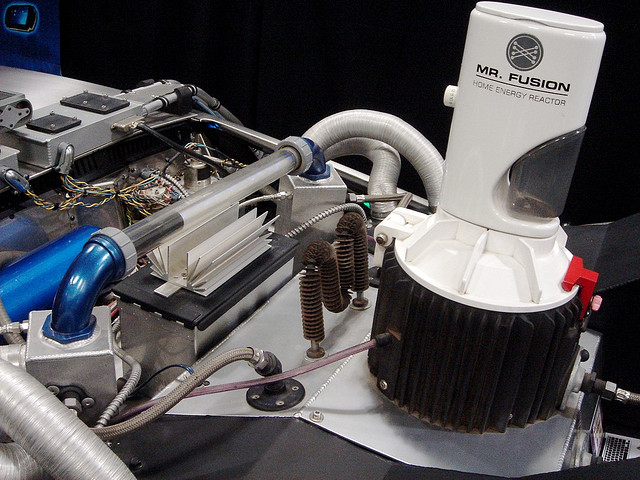 That being said, the move takes place on 21 October, and its not too late to take a chance on creating or investing in one of the many products that have managed to evade larger corporations.

The Garden Centre fruit dispenser is first seen in the McFly kitchen. Located close to the ceiling, one can only reach this ‘fruit bowl’ by voice command. It will then lower, in this case to the kitchen table, and retract once used. The amazing thing about the fruit dispenser, however, is its ability to preserve fruit (and vegetables) as well. And the fruit dispenser promotes good manners to boot. McFly is unable to call the dispenser down by merely shouting fruit!” or hey, fruit!” It takes the magic word please to call the unit down from the ceiling. You would then have to say thank you in order for it not to retract. Much has already been done in the way of ‘friendly interaction’ between product and consumer. Tokyo scientists have even invented a fridge called the happiness counter which forces people to smile in exchange for food. No smile and the fridge locks itself. This type of technology could be programmed to teach children manners. And, as the happiness counter scientists have found, such forced interaction has a genuinely positive effect on the users mood. Indeed, the technology that is utilised in the dispenser actually already exists, but has yet to be used in this fashion. Related content:

When Doc finds out that Marty has bought a sports almanac from a memorabilia store in order to make money off of gambling, he takes the book and throws it into a ‘summoned’ trashcan. The LITTER BUG, shockingly orange, was named after the slang term ‘litter bug’, for people who throw their rubbish on the ground. To prevent littering, the LITTER BUG listens to what you say. If it hears anyone mention that they want to throw something away, it will be at your side immediately. The moving trashcan is quickly on its way to becoming reality. A Japanese inventor has created the Smart Trashbox, which relies on a Kinect-style 3D motion tracking camera to track pieces of flying garbage. In that sense, the LITTER BUG is still far from conception and leaves much space for companies to wiggle in and create themselves a self-reliant, moving and street-worthy trashcan.

The Mr. Fusion Home Energy Reactor was first seen when Doc returned from 2015 and dropped a banana peel and Miller beer can into the unit (which looks like a swanky coffee machine). Essentially, it converts household waste into energy. It was through this method of throwing rubbish away that Doc and Marty were able to charge the DeLorean time machine. And it appears that absolutely ant type of rubbish will work. Such technology will not only make the world cleaner, but it will go a long way to solving our energy problems. The process involves nuclear fusion, which has been speculated to be like cold fusion (a hypothetical nuclear reaction that occurs in room temperature that has only so far been obtained in Val Kilmer movie ‘The Saint’). Although it most certainly won’t be able to fuel a flux capacitor, NASA researchers are on their way to building a prototype device that will be used pm the International Space Station. It will be a mini Trash to Gas Reactor and will be used on missions that go beyond Earth’s orbit. This is a huge breakthrough, but although NASA seems to have this product cornered, it is still possible to manufacture one for home-use.

By now it was envisioned that the entire service station process would be automated. You would park your obviously flying car and a robot would fill your tanks with… Havoline We’ve seemed to miss a few fuel types along the way. But that’s not the only thing the robot is capable of doing. It would be checking oil. Checking landing gear. And the original Texaco slogan had been changed from you can trust your car to the man who wears the star , to you can trust your car to the system with the star . Currently we still fill up our vehicles the manual way, but the movie got a huge tick off the list for seeing a ‘pay at pump’ future. Now all we need is the Compu-Serve payment option. The closest to come to the full automation process is a prototype robot manufactured by Husky and Fuelmatics. Mo the robot is capable of fully servicing your fuel tank.
Infra-red lights and cameras locate the fuel door,” the company said. An arm with a suction cup opens the fuel door. A nozzle then extends into the fuel tank and releases the desired amount of fuel. Once the tank is full, the nozzle returns to the pump. And although that’s an amazing accomplishment, it has yet to be able to service the rest of the car as well. Image source By Shan Schutte