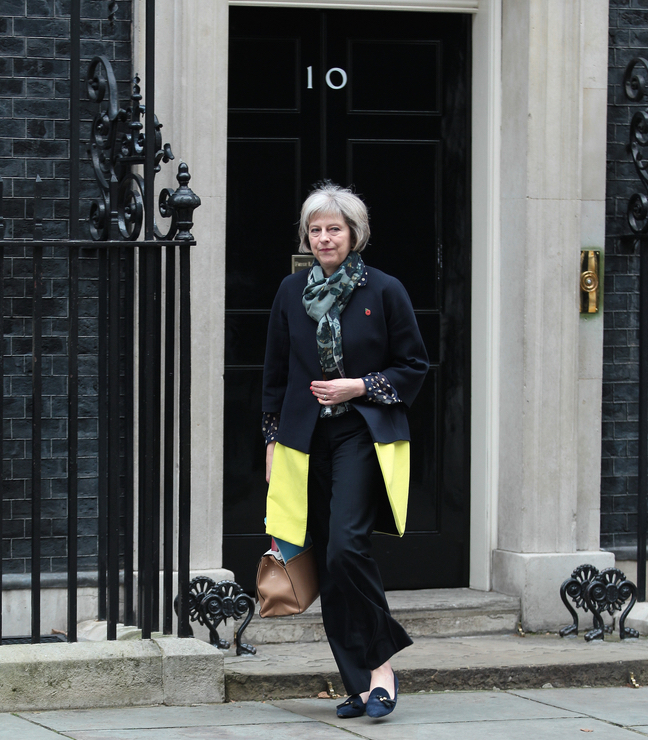 May?s move into 10 Downing Street will be official as of Wednesday 13 July, when she will become the first female prime minister since Margaret Thatcher. Having unsuccessfully championed a campaign to remain in the EU, David Cameron resigned on Friday 24 June when the EU referendum vote was revealed with 52 per cent of voters in favour of leaving. Cameron said: ?I was absolutely clear about my belief that Britain is stronger, safer and better off inside the EU. But the British people made a different decision to take a different path. As such I think the country requires fresh leadership to take it in this direction.? That fresh leadership power has been placed directly into the hands of May, who Cameron has given the seal of approval. ?I am delighted that we are not going to have a prolonged Conservative leadership election campaign,? he said. ?I am also delighted that Theresa May will be the next Prime Minister. She is strong, she is competent, she is more than able to provide the leadership that our country is going to need in the years ahead and she will have my full support.? He added that Wednesday 13 July will see him attend the House of Commons for Prime Minister?s Questions before officially handing over control of the country to May before the day is done. Seemingly rather relieved about his decision, he was caught humming to himself as he strolled into 10 Downing Street after making the announcement.

But what does May have up her sleeve now she is the nation?s leader? ?I am honoured and humbled to have been chosen by the Conservative party to become its leader. Brexit means Brexit and we?re going to make a success of it. We need to unite our country,? May said. She claimed her reason for campaigning to succeed Cameron was a desire to ?steer us through what will be difficult and uncertain economic and political times,? while commenting on a need to negotiate the best deal for Britain leaving the EU.

‘Together, we will build a better Britain’ – watch Theresa’s speech after being chosen as @Conservatives leader: pic.twitter.com/MIUIqRVSoM

We?ve heard what Cameron and May think, but how do business leaders feel about the home secretary?s promotion? According to EMEA VP of Xactly, Tom Castley, May will herald opportunities for women in business ? particularly amidst ongoing problems of the gender pay gap in the UK, which is something Cameron was keen to address. ?Although she isn?t the first female Prime Minister, we are in a society where the gender pay gap is not only a failing in equality, but is also bad news for the economy,? said Castley. ?Theresa May?s forthcoming appointment as next Prime Minister of the UK is a great step in the ongoing gender battle. The fact that this is a major appointment for a woman in the UK is null and void, this is a leadership role that is vital to the global economy, let alone one country.?

He highlighted research to note that businesses with over ten per cent of women leading have higher profits than firms that aren?t gender balanced, and said companies can learn from the arrival of May.

?In order to achieve this equality, every organisation must be self-critical and assess where any pay gaps lie and how they can be addressed. With women making less money across the spectrum regardless of their career paths, it?s time for every employer to take a holistic look at their compensation model to ensure there are no gender pay gaps,? added Castley. ?It is an exciting time to have a female Prime Minister at the helm, and will be interesting to see what this does to progress the gender balance.? Elsewhere, Mike Cherry, national chairman for the Federation of Small Businesses (FSB) believes May needs to concentrate on small businesses. ?With Theresa May now confirmed as the next UK Prime Minster, the Government must act decisively to secure our long-term economic stability after the decision to leave the EU. Immediate action is needed to improve small business confidence and allow them to reliably plan ahead for the future,? Cherry said. The FSB leader added that May should have small firms? interests in mind when her EU negotiations take place, insisting that simple access to the single market, funding, the means to hire people and regulatory clarity are all requirements to consider. Cherry continued: ?We also call on Theresa May, as the new Prime Minister, to guarantee non-UK EU nationals, many of whom run their own small businesses or are employed by small businesses, to be granted the right to remain in the UK both during the negotiations and thereafter ? and to use the negotiations to ensure that UK small firms and the self-employed who work in the EU can continue to do so. ?With business confidence at an all-time low, government must get back to business on the many vital issues which had been put on hold during the EU referendum campaign and subsequent fallout. “These include key infrastructure projects like airport expansion, HS2, energy security and the Northern Powerhouse as well as delivering on business rates pledges and changing plans for quarterly tax returns.” By Zen Terrelonge

Here are?four EU business laws that have a dubious future after Brexit.