As the global debate about access to equal pay and opportunities for women continues in every industry, she is in an especially unique position to add her voice to challenges in the world of movie making.

Bell is currently one of only two woman (and the only woman with a CEO job title) heading up any of the top independent film production studios in the UK, according to research using publicly available data* from the BFI (British Film Institute).

Despite increasing efforts to encourage more women into top jobs in the film industry, and the widely publicised global #MeToo movement shining a spotlight on its darker side, Bell is living proof that there is still a long way to go to achieve equal opportunity goals in the film business.

“There’s definitely an appalling cavernous gap between those women who aspire to reach the top in the business side of film and those who actually do,” she said.

“You don’t need to dig too deep to see the scale of the challenges ahead for women in every area of this business,” Bell added.

“If we can learn one thing from recent events in the industry, then it must be that small changes won’t cut it; the time is now for a transformational overhaul when it comes to parity of pay and forensic scrutiny of access to equal opportunities and progression.”

Bell’s company – Goldfinch Studios – is a fast-growing group that brings together physical production facilities in York, post-production expertise, sales and distribution and partnerships with brands looking for exposure through cinema releases, television shows and gaming products.

With returns on investments in the order of 180 per cent in some instances, Goldfinch’s star is rising in the finance sector – but Bell is quick to point out that the business is much more than just access to investment.

“We are a collection of great teams of people who each focus on the key building blocks in the creative process, from developing ideas, producing, world-leading visual effects, and selling the finished products,” she explained.

One major project currently in post-production is Waiting for Anya, which is an adaptation of the Michael Morpurgo book of the same name, with a Hollywood A-list cast, including Noah Schnapp (from Netflix’s hugely successful “Stranger Things”), Academy Award-winning actress Anjelica Huston, and French film star Jean Reno.

“You don’t need to dig too deep to see the scale of the challenges ahead.”

We are meeting on Bell’s home turf in Newcastle; she was born in nearby Gosforth and graduated with a degree in law from the University of Newcastle, following an initial spell at University College London (UCL).

After working with Arthur Andersen and specialising in tax, she progressed to Price Waterhouse in the days before it became PwC and qualified as a Chartered Tax Advisor – where the initial foundations for her later career were laid.

“I was always involved with the marketing, media and property sides of businesses,” she explains. “There are many similarities across these business areas which I found fascinating and linked.”

At the age of 29, Bell was made a Partner at HLB Kidsons which shortly after became Baker Tilly, and – given her age and gender – created media interest in her home city in a way she did not enjoy at the time.

“When I became a partner at a very young age, I was often lauded in the local press as somebody who had broken through the glass ceiling, which didn’t sit well with me,” she points out, adding: “I don’t think it matters if you are a man or women, or what age you are, the achievement should stand alone.”

In 1996, Bell first turned her business attentions to film.

She recalls: “I decided to try and raise money for a film in the North East of England at Christmas – perhaps not the most sensible timing. I remember we held a big launch event for the fundraise, which was due to close on New Year’s Eve. Our target was £3.2m, and we reached £3m in a under a month.”

Despite attracting the majority of the investment, the film did not go into production at the time, but she describes the experience as a crucial moment with lots of lessons learned for the future.

Roll the clock forward 20 plus years, however, and Bell’s film industry CV has rocketed, and so have the numbers.

Last year, the company’s Yorkshire-based production facilities partner, formally known as GSP Studios, was brought into the Goldfinch Studios family – making the combined entity the most prolific independent film producer in the UK.

Based on BFI data, the company is ranked number one based on films produced and completed in the most recent two-year period – ahead of companies including Working Title (producers of ‘Darkest Hour’ with the Oscar-winning performance of Gary Oldman). 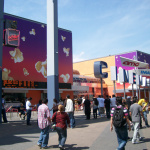 What madness would drive a cinema chain CEO to approve texting during films?

Adam Aron, the CEO of cinema group AMC Entertainment, sparked controversy with plan to allow texting in cinemas – the one sacred place that customers go to be relieved of communication with the outside world.

Overall, Goldfinch has channelled finance into more than 180 projects and counting across the film, television, animation and gaming sectors, amounting to approximately $250m (USD) in investment.

Bell is particularly proud of the company’s contribution to the creation of around 4,000 jobs in the UK production sector and a continuing commitment to identifying and supporting new young directors through its First Flights programme, which provides finance and support for first-time film-makers.

As the company prepares for the 71st Cannes Film Festival (8 to 19 May, 2018), there are around 30 projects on the its slate in various stages of development, production and completion, Bell confides.

Other standout films among an impressive list of projects are: Sometimes, Always, Never which stars Bill Nighy, and The Ice King, a documentary-feature about arguably the greatest ice skater of all time, John Curry, who transformed a dated sport into an art form and made history by becoming the first openly gay Olympian.

Despite the impressive rise of Goldfinch under her stewardship – prompting one of her peers who wished to remain anonymous to claim she is “the most powerful women in the British film industry” – Bell says that film investment and film making are not for the faint-hearted, but when you do it right it can be extremely rewarding. The key, she added, is to plan.

Fond of analogies, she likens the actual nuts and bolts of the business of film making to something akin to property development.

Bell enthused: “When you sell a film, you can sell it like a block of flats.  Each of the flats represents one country or territory, so you are looking to sell your film to cinemas and broadcasters in all sorts of countries around the world to recoup your investment; the investment in building the block of flats itself represents just how costly making a film can be.

“The UK is usually your show flat, and then the US market the penthouse, so an objective is to maximise the value of the show flat and penthouse with any film that you make, and that in turn creates the momentum and interest for wider international sales, enabling you to close sales on the entire block.”

* The BFI lists 16 leading independent film production companies in the UK and, at the time of publishing, only two had women in either a CEO or equivalent role. 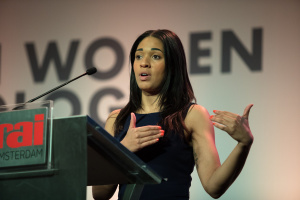 Looking to tap into a new market? Here’s how to break New Zealand