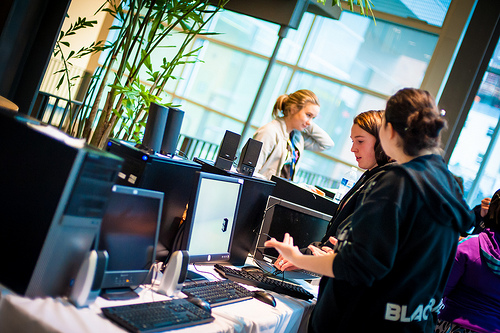 “With a huge range of diverse roles, technology is an extremely exciting industry to be a part of,” explains Claire Vyvyan, one of only three executive directors and general managers at Dell UK. “But despite this, only 17 per cent of women work in technology. This is an astonishing figure given IT’s ever growing presence in our everyday lives.”

The core issue, it seems, is the under-representation of women who currently make up less than one fifth of the IT workforce. The Centre for Economic and Business Research believes that by increasing the number of women working in IT alone, the industry could generate an extra £2.6bn a year for the UK economy. These findings emphasise the real benefits of encouraging women to learn more about this innovative and ever-growing sector. Pat Nice, CEO of Reconnix, explains that the Cebr research highlights an “IT skills gap that threatens the future of the UK running a competitive and efficient IT industry. It appears that by re-evaluating the way we encourage young females, we can not only close this gap but also boost the economy.” But does this mean that technology is still a male dominated field? “Having worked in IT for over 20 years, and been the only female in the room on many occasions, I can say with some certainty that we haven’t yet resolved the challenge of attracting an equal balance of men and women into the industry,” said Monique Morrow, CTO of Cisco Services and supporter of Cisco Networking Academy. Patricia Finlayson, Senior Solution Product Marketing Manager at Polycom echoes the sentiment that although the attitude to women is steadily phasing out of our society, it’s still there and is something that needs to change. “I hate to admit it, but really it’s sexism,” she told Real Business. “When I worked in technical support – and this was some time ago now – I’d get out a screwdriver and be asked by the men in the room if I really knew how to use it!” Our difference in attitudes, however, can perhaps be explained by Moore’s law, which describes the exponential growth of computing power; men are obsessed with form, technicalities and speed.  “Technology to boys starts very young,” suggests Dave Wallace, CEO of Heath Wallace. “It’s the very definition of a self-fulfilling prophecy; technology is male dominated, so it makes things that appeal to the male mind. As a dad of five (two girls and three boys) this has always played on my mind. I recently sat talking to my daughters about what they wanted to do when they were older and it hit me that, even in this day and age, gender prejudice might make their working life much harder than for my sons.” Katherine Riddell, co-founder at social media analytics tool BirdSong agrees. “It starts at an early age. At my 15-year-old daughter’s school IT club, it is mostly young male geeks coding away and building things. By the age of 18, boys are already very sophisticated technologists. Of the women who do go in to tech companies, too few hang around long enough. Men come in with an abundance of confidence and less fear of making mistakes, leaving women fighting to get heard.” Which brings us back to the original question about gender imbalance. Why is tech a boys club? Image source By Shané Schutte