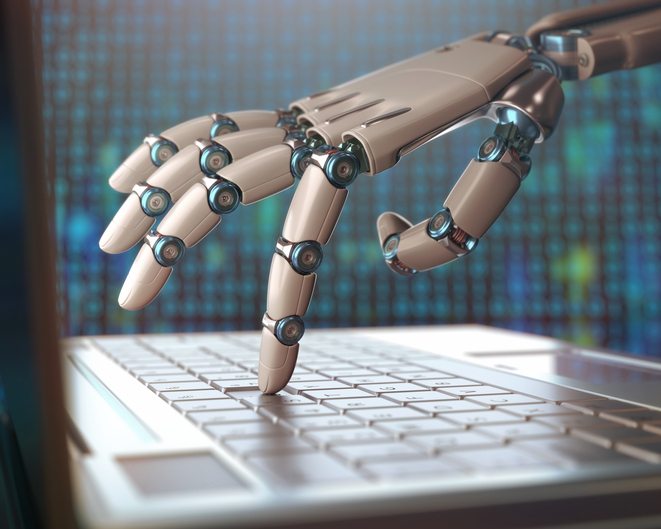 Share via
A Deloitte report summed the mixed-bundle of awe and trepidation around workplace automation perfectly: “We have seen it in the movies… we have read fantastical futuristic fiction about it as youngsters… and now it is upon us: machines performing human tasks.” But while those in the FTSE 100 have clambered to adapt, bosses are keeping robotic changes out of the press. Automate This, written by the Deloitte team, claimed robot-led workplace automation – not yet on par with visions concocted by film makers – will change today’s workplace much like the Industrial Revolution transformed the factory floor. And, as we’re inclined to believe, it will lead to the disappearance of many roles. As was suggested by Josh Bersin, founder and principal at Bersin by Deloitte, in a Forbes article: “We are in an economic cycle where jobs, as we know them, are rapidly changing. In fact, I’d venture to say we are reaching a time when jobs, as we know them, are going away.” He pointed to analysis of “the future of work” in America by Oxford University, which maintained 47 per cent of US employment would vanish over the next 20 years. There’s no reason to think other countries, like the UK, wouldn’t follow suite – and that’s not a bad thing, Bersin claimed. “For every job that ‘goes away’ another one or two is created. And I’m not talking about the small number of jobs needed to program computers. Every example we’ve seen shows new jobs are created. “In the 1980’s there was a wave of automation in the banking industry, starting with the ATM machine. At that time we predicted the end of the bank branch and the branch teller. The opposite occurred. Today, with more than 1m ATMs world-wide, there are almost four times as many bank branches and over ten per cent more tellers than in the 1980s.” There will likely be a challenges ahead, but it’s no wonder workplace automation has been cited as the second most important strategic priority for shared services – expected to shift into first place in ten years’ time. In fact, numerous companies already have plans in place for when “the next wave hits”. But not everyone is willing to share on that front, Redwood Software unveiled. It took a look through the annual reports of FTSE 100 companies to discover workplace automation plans. Only eight bosses revealed, however, detailed to the public how they planned to make the most of workplace automation, despite most claiming to be “working on it”. Even then, only two – Aviva and Capita – included detailed references to both robotics and artificial intelligence (AI). According to Redwood Software, it’s in an effort to keep ahead of the competition.  Its chief of staff, Neil Kinson, said: “We know there are a lot of high-level organisations and brands across a variety of industries that are doing some sort of work with robotics and automation, so it’s surprising to not see this reflected in annual reports. However, with business competition continuing to rise, everyone is working to gain the strategic upper hand and not give too much away. “Every business is undergoing some form of digital transformation, and many are using robotics as a means of achieving success when doing so. The problem is that as the business case for automation continues to grow, the desire for organisations to become innovators in robotics will only become more prominent. “As companies seek to increase value by strategically streamlining core operations, we’re bound to see competing services and a variety of offers. ”