In 2016, the US Equal Employment Opportunity Commission released a report about harassment in the workplace. The paper stated that 25-85% of women have experienced sexual harassment. The disparity in the numbers is due to the variety of ways sexual harassment plays out from derogatory or gender-based comments to unwanted advances, and even more serious crimes like rape.

Whilst we all want full democratic and friendly relations between the genders in both the professional and private worlds, it cannot be denied that the statistics show the majority of reported claims are made by women with men as the perpetrators. (The aforementioned EEOC data shows fewer than 18% of charges were filed by men.)

More than 30 years after the US Supreme Court recognised claims for sexual harassment as a form of discrimination based on sex, there are still a staggering number of charges filed with allegations of workplace sexual harassment – and it’s an issue that knows no global bounds.

Whilst the US statistics are less than encouraging, women face similar workplace risks across the UK.

According to the report, three out of four women who experienced sexual harassment never told a manager. Because it is primarily men who are the harassers, one obvious suggestion is to add more women to the equation and dilute the male-dominated culture, especially in the C-Suite.

Thus, the solution is for women everywhere to do what many have been doing for decades, they must continue to start their own companies.

For instance, Whitney Wolfe was a co-founder of Tinder who left and filed a sexual harassment suit that was settled in 2014. She then founded mobile dating app Bumble which puts the power in women’s hands, letting them initiate the first move when connecting with a potential date.

Last year, she took the Bumble concept into the business world and launched Bumble Bizz. The app allows Bumble users to fill out a new profile tailored to highlight their hobbies and professional accomplishments.

This means users are not showing potential business contacts the same beach pictures they might use on the dating app. Otherwise, the mechanism is the same: users swipe left or right depending on the profiles they see, and like on the dating app, women have to make the first move. Wolfe went on to explain that the point of women making the first move is to make it easier for women to network professionally and prevent unwanted approaches.

Pioneers such as Wolfe are working to desexualise and enfranchise women in the workplace through digital technology – and she is not the only one out there doing it.

Female venture capitalists are forming VC funds like True Wealth Ventures that specifically support companies started by women. In doing so, they are helping to diversify the business leader and employee talent pool to include more women, which means less male-dominated businesses with a toxic hyper-masculine culture, and hopefully, less chances of sexual harassment.

In addition to apps and funding initiatives, there are digital networks springing up where women can mentor, gain advice and support each other. For this there are established organisations, like the American Business Women’s Association (ABWA) as well as newer, more digitally-focused groups such as Lean In Circles, a networking site operating for women in over 160 countries.

Representation is good for everyone

It’s possible to establish workplaces where there is significantly less chance of sexual harassment. But to make this the norm, we need more women in executive roles, funded by women and focused on their needs, as well as more digital platforms and inclusive funding resources.

All this will create a more egalitarian work culture, which means a better understanding of equal workplace rights for all professionals regardless of their needs or differences.

Debrah Lee Charatan is a real estate entrepreneur, philanthropist and writer who is particularly interested in gender politics in the workplace and throughout the wider world of business.

August 2018 economic statistics: All the figures SMEs need to know 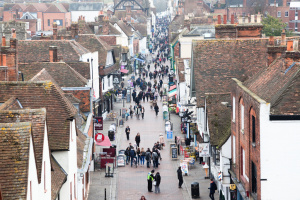 Could hiring in-store expertise be the key to saving the high street?