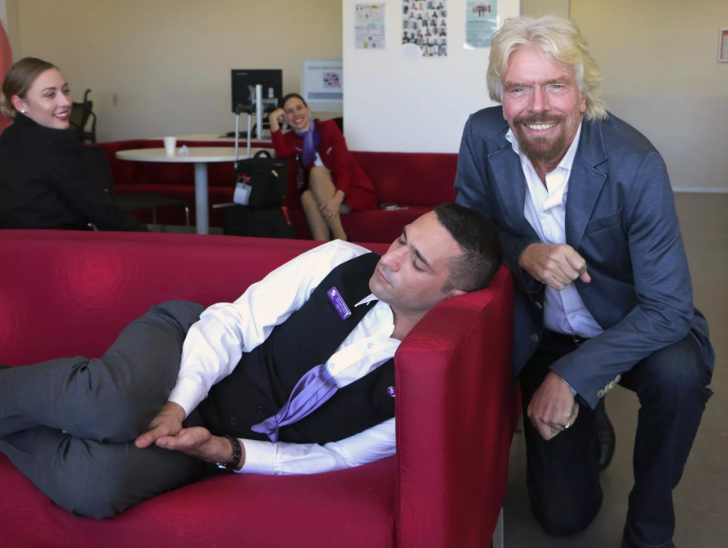 Quick hacks to functioning at work on little sleep

Rather fond of Down Under, Branson said in a blog that it’s great travelling there, though a shame he can never find the time to spend longer in the country. “I love to get out there and meet the people that make our brand shine. Maybe it’s the glorious Southern Hemisphere sun or the salty sea air, it seems like our Aussie team members permanently wear infectious smiles,” said the billionaire businessman, who has a rather famous grin of his own. He claimed Virgin Australia was full of smiles and laughter. Perhaps, in addition to the weather, that’s down to having a boss like Branson who seemingly gets so interactive with staff that he’s more than happy to photobomb unsuspecting team members who are caught sound asleep. “This guy wasn’t up to much at all – I caught him sleeping on the job! Wow, did he get a shock when I woke him up. He must have thought he was dreaming because he went straight back to sleep,” wrote Branson. “To be fair, he was on standby, getting some much needed rest. “On the other hand, it appears that some of the ladies in the command centre have been up to quite a bit. I must have kissed three or four baby bumps. We love a Virgin birth.”

Read the latest from Virgin:

At least it was an semi-authorised window of opportunity for sleep – 34 per cent of people have admitted to falling asleep in team meetings. Meanwhile, office workers have been found guilty of wasting 12.5 hours a week through procrastination, with social networking and online shopping among the top ten activities likely to help them waste time. By Zen Terrelonge Fancy creating a culture like that of Virgin’s? Here are 50 things you can do to make your office cool.