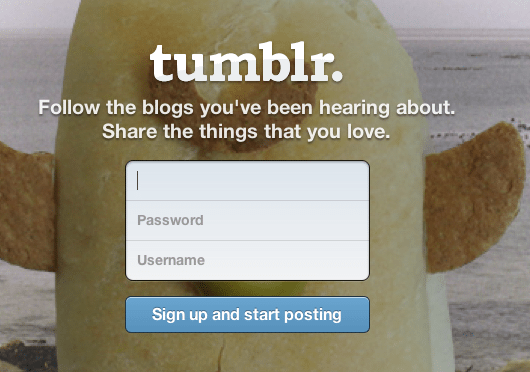 As expected, Yahoo! announced its acquisition of white-hot blogging platform Tumblr this morning. The internet giant has bought the New York company for ?approximately $1.1bn, substantially all of which will be paid in cash?.

Tumblr is one of the fastest-growing media networks in the world, with more than 300 million monthly unique visitors and roughly 900 posts per second. Its tremendous popularity among audiences of all ages brings a significant new community of users to the Yahoo! network. The combination of Tumblr and Yahoo! is expected to grow Yahoo!?s audience by 50 percent to more than a billion monthly visitors, and to grow traffic by approximately 20 per cent. But here’s the most interesting sentence in the press release: ?Per the agreement and our promise not to screw it up, Tumblr will be independently operated as a separate business.? Founder David Karp, who will remain at the helm as Tumblr?s CEO, said: ?Our team isn?t changing. Our roadmap isn’t changing. And our mission ? to empower creators to make their best work and get it in front of the audience they deserve ? certainly isn’t changing. But we?re elated to have the support of Yahoo! and their team who share our dream to make the Internet the ultimate creative canvas. Tumblr gets better faster with more resources to draw from.? It’s rare that an acquisition of this size ? or any other ? will allow the company bought the freedom to stay itself. Will Tumblr really remain a separate business? Or will the platform change under Marissa Mayer? Share your thoughts with us in the comments.