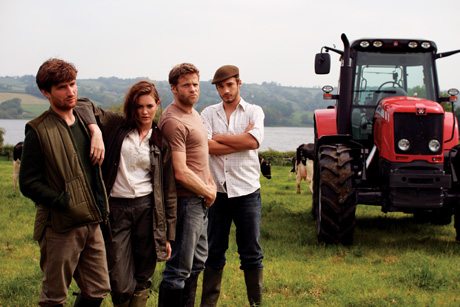 Share via
The two-minute Yeo Valley ad features a group of farmers (who look like models) rapping about the West Country and producing organic milk. It was directed by LA-based superstar Julien Lutz, who?s shot music videos with the likes of R Kelly, Usher, Kanye West and Nelly Furtado. ?The ad is a big first for Yeo Valley. We?ve never been on TV ? other than sponsoring the local weather channel,? says Tim Mead, who took over the family-run, organic-food business in 1990, aged 26, when his father Roger died in a farming accident. ?More than 12 million people in the UK buy yogurts and, of those, 1.5 million buy Yeo Valley. But market research shows there?s a further 4.5 million consumers who would like our brand ??they just don?t know about us.? Mead says ?250m is spent on advertising in the dairy sector each year. ?If we?d have come up with a boring campaign involving farm images and tractors, our pebble wouldn?t have made a splash,? he says. So why go for a rap? ?We love music ??we?ve had a stall at Glastonbury festival for the past ten years. And with the word ?Yeo? in our brand, rap was the obvious genre. When you?re up against the likes of Yop, M?ller and Nestl?, you have to be entrepreneurial.? But cool ads don?t come cheap. Yeo Valley spent ?1.5m on marketing last year. This year, it spent an additional ?5m. The advert was first aired at 7.55pm on October 9, making it the first advert of the first ad break during X Factor. Within minutes it emerged as the number-one top trend worldwide on Twitter. The YouTube page has received more than a million viewings. Yeo Valley began making yogurt in 1972 and now turns over ?185m, with four production dairies at Blagdon, Cannington, Crewkerne and Newton Abbot. The company employs 1,200 people and holds the Queen?s Award for Enterprise for Sustainable Development.