Simon Woodroffe founded the global Japanese sushi franchise YO! Sushi at a bit of a turning point in his life.

He was recently divorced, unemployed and running out of money, and – here’s the inspirational part – he decided to use a loan against his flat to open a sushi bar. Now, 21 years later, the brand has more than 90 restaurants worldwide.

Ahead of his seminar at the Business Show next week, where business owners will congregate to network, attend talks and learn from one another, Woodroffe offered up these pointers for entrepreneurs:

“You can start anything by taking a notebook and writing your ideas down. So many people sit around going ‘shall I? shan’t I? Where shall I go?’ Start immediately and spend money, small amounts of money which you are willing to lose,” said Woodroffe.

He encourages entrepreneurs to have several things on the go at once, but also know when to let go of things.

Instead, do you research, he advises. If you do that over a period of time, you start to believe in it, and eventually you can drown out that negative voice.

“When you believe something and you have confidence – it’s infectious to other people. A modern entrepreneur is someone who can appear on TV and talk to other people while being themselves, not being some fake person that puts a voice on. I actually try to use non-business, childlike words to help me connect,” Woodroffe claimed.

Lastly, for any wannabe entrepreneurs out there still undecided, Woodroffe offered up these final words of wisdom:

“I’ve never met a person who went out to do what they really dreamed of and regretted it – regardless of whether they succeed or failed. But I’ve met many, many people who have looked back later in life and said: ‘I wish I’d taken more chances when I had the chance.’”

On 16 & 17 May, Simon’s seminar will be one of 250 educational talks taking place at The Business Show 2018 at London’s ExCeL – with the rest coming from the founders of organisations such as Poundland, Mallet Footwear, Grenade, University Cribs and more. 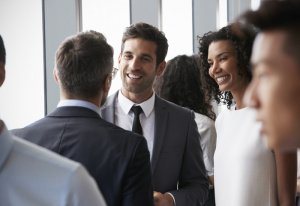