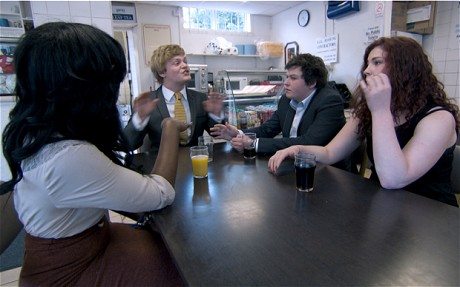 On last week’s Young Apprentice, the teams had to choose two products to sell to the over-50s market. Both teams fought their corner but Kintec stole the show.

Lewis left the competition. And then there were eight.

This week, the Young Apprentice stars met at Wembley Stadium. Lord Sugar tasked the teams with coming up with their own anti-perspirant deodorant aimed at their own age group. They had to design the packaging and produce a television advertisement. It was going to be a sweaty challenge. The teams were mixed up again.  In Atomic: Hayley; Haya; Harry H; and Zara (as project manager).  In Kinetic: Gbemi; Lizzie; James and Harry M (taking the head honcho role).

In Kenetic, Harry M decided the team should aim their deodorant at the female market. Leaving nothing open for discussion, he settled on the brand name “Vanity”. The team weren’t keen on his ideas, and there was a clash between Lizzie and Gbemi in the design studio.  The tension got worse as Harry M and James failed to plan their storyboard properly before the shoot ? and the models were left hanging around on set.  After a considerable amount of mucking around, Kinetic eventually decided to play the humour card and use a geeky girl in their ad. Team Atomic wanted to aim their deodorant at the male market. They came up with the name “Raw”. Haya and Harry H quickly decided on the look of their product, with Zara and Hayley choosing a dancing model to feature in their ad. The next day, the Young Apprentice teams had to sell their brands to the top dogs at advertising agency JWT. Atomic’s pitch went very well, with Harry H delivering a stunning presentation.  The Kinetic advert went down well with the judges but the team struggled to come up with decent responses to the questions being fired at them.

There wasn’t a dry armpit in sight in the boardroom this week. Both teams were quick to blame their leaders on any shortcomings. Lord Sugar wasn’t very impressed with Kinetic’s packaging for the Vanity brand. He thought their ad was a clever concept but wasn’t executed well. Atomic’s campaign got a thumbs up and the team won the task.

Harry M decided to bring Gbemi and James back into the boardroom as he felt they contributed least to the task. Lord Sugar blamed Gbemi for the design of the product. His famous finger was pointed at her. “Gbemi, you’re fired!”

What a shocker. We were certain that Harry M would go. It wasn’t really fair to blame Gbemi for the failure of the whole project. Next week, we hope to see more of Hayley. She has some great ideas but gets ignored. The Young Apprentice competition is hotting up. Stay tuned for next week’s review.