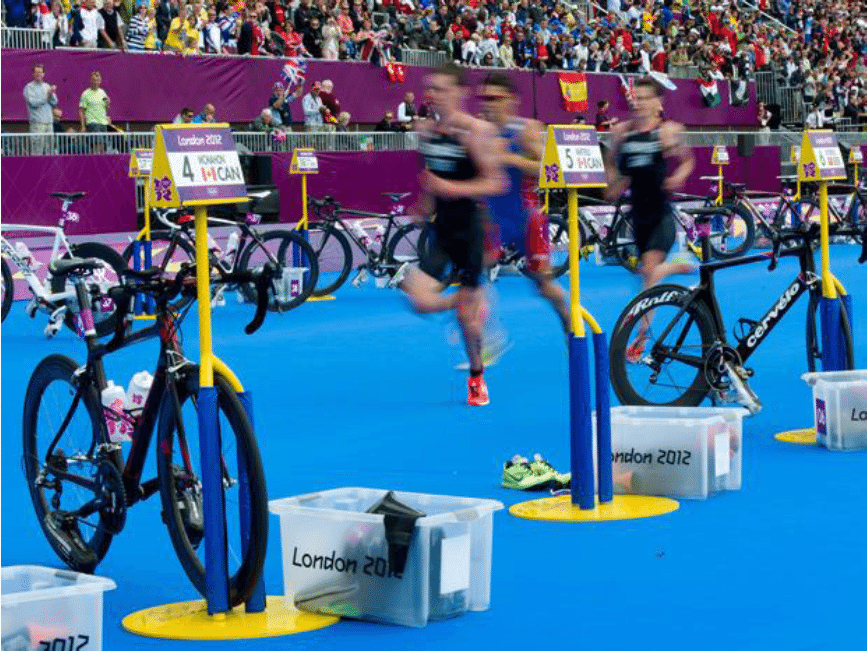 But as usual there’s two sides of the coin and as usual the bad side looked shinier on the papers’ front pages. Turn the coin around and you’ll see that the other side is actually worth looking at, too. Many businesses profited from the Games in a rather remarkable way.

James Nash and his business partner Josh Coleman launched their first company, Bike Dock Solutions, straight out of university in 2008. In 2012 Bike Dock Solutions became the only bike parking company supplying London 2012 cycling events. You can imagine what went on behind the scenes; they provided transport racks to mount inside UPS trucks to move 225 bikes between mountain bike, road, triathlon and track events, provided A-frame racks for the velodrome to store bikes between events, and altogether supplied over 1000 racks to the London 2012 Olympic cycling events.

That’s enough for a young company to handle, but Nash and Coleman had their hands full with more than just bikes. After all, the pair have launched four other companies since Bike Dock Solutions came to life. Their Hudson Garden Rooms Ltd supplied the Olympics with garden pods used by the judges for the dressage and equestrian events. You might not be an expert in judging huts, but it’s not hard to see that the Hudson huts had the kind of personality and finesse in design that only a smaller company can provide. It must be why they were approached for a job so important for a young company to take.

But is that all? No, not yet. As I said, Nash and Coleman had their hands full these past few weeks. Their third company, Shelter Store was approached out of the blue to design, build and install four lengthy stainless steel tunnel shelters. You might have seen them walking along the Horses Parade, outside the Olympics volleyball arena. The task was laid on the less than a year old company only two weeks before the Games kicked off.

?This one was quite a challenge,? James Nash admits. ?We were pretty concerned about building the shelters in only two weeks time. But it was the Olympics; to be able to provide this service is a chance a young business has once in a lifetime.? And after all, it worked out fine. ?There’s already been numerous benefits from this. People know we’ve been involved and there’s been a major upsurge in enquiries for all three companies.? There’s the polished other side of the coin: at least the Olympics weren’t bad for all SMEs. Now, tell us: how did London 2012 affect your business?