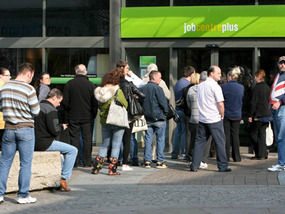 According to the latest figures from the Office for National Statistics, UK unemployment rose by 49,000 to almost 2.5 million between September and November last year.

One in five 16 to 24-year-olds are now out of work, after a rise of 32,000 to 951,000 without jobs – the highest figure since records began in 1992.   About 600,000 Britons in the same age group have never had any type of job since leaving full-time education, according to separate figures from the Department for Work and Pensions. The UK unemployment rate is 7.9 per cent, but for 16 to 24-year-olds it is 20.3 per cent. PM David Cameron said the rise in unemployment was a “huge concern”. And, as usual, the Coalition pointed the finger of blame at the last government: “This is compelling evidence of the way in which the last Labour government completely failed a generation of young people. We have inherited a huge youth unemployment challenge and are determined to reverse the failures of the past,” commented Chris Grayling, the employment minister. Change the record please, boys. Jonathan Russell, a partner at accountancy firm ReesRussell, says the figures have, in fact, been cushioned by the huge reduction in migrant labour from Europe. He adds: “While we are seeing encouraging signs in manufacturing, the service sector – which is a huge employer – is suffering badly and this is where many of the civil servants who have lost their jobs would be looking for employment. The service sector suffers last in a recession and therefore recovers last and I would expect to see further rises in unemployment over the course of 2011 with a recovery in the second half.